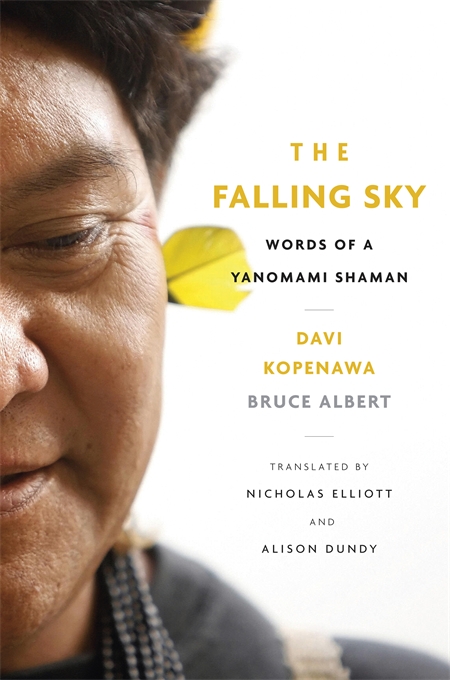 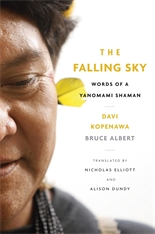 Words of a Yanomami Shaman

“What does it mean when someone says they can understand the inner lives of animals, trees, or even forests? Bruce Albert and Davi Kopenawa provide a vivid sense of this in The Falling Sky: Words of a Yanomami Shaman. The Yanomami of the Amazon, like all the indigenous peoples of the Americas and Australia, have experienced the end of what was once their world. Yet they have survived and somehow succeeded in making sense of a wounded existence. They have a lot to teach us.”—Amitav Ghosh, The Guardian

“A perfectly grounded account of what it is like to live an indigenous life in communion with one’s personal spirits. We are losing worlds upon worlds.”—Louise Erdrich, The New York Times Book Review

“The Falling Sky is several things. It is the autobiography of Davi Kopenawa, one of Brazil’s most prominent and eloquent indigenous leaders. It is the most vivid and authentic account of shamanistic philosophy I have ever read. It is also a passionate appeal for the rights of indigenous people and a scathing condemnation of the damage wrought by missionaries, gold miners, and white people’s greed. The footnotes alone harbor monographs on Yanomami botany and zoology, mythology, ritual, and history. Most of all, The Falling Sky is an elegy to oral tradition and the power of the spoken word… Kopenawa’s elaboration of shamanic concepts goes beyond ethnography and becomes a new genre of native philosophical inquiry. When an indigenous narrator this articulate produces an original exegesis of his own worldview, anthropology and anthropologists have become almost obsolete… Like his ancestors, whose voices will continue to echo in shamans’ songs after his death, Davi Kopenawa has made sure that his own powerful words will be preserved.”—Glenn Shepard, Jr., The New York Review of Books

“Anthropologists and other specialists will find much to relish in this beautifully crafted evocation of Yanomami culture and philosophy. Based on hundreds of hours of interviews taped in native language, it is enriched by almost a hundred pages of footnotes, ethnobiological and geographic glossaries, bibliographical references, detailed indexes and, last but not least, an essay by Bruce Albert on how he wrote the book. While the book resonates with current Western metaphysical angst about finitude, it is written principally as a long shamanic chant that opens up a multitude of interior journeys and provides a new consciousness of the world as a whole… The Yanomami have suffered the effects of deadly epidemics, land dispossession and aggressive missionary evangelism. The resulting break in the flow of knowledge between older and younger generations, a lack of communication between indigenous and nonindigenous interlocutors, and a general loss of connection with the natural environment, are common problems. Despite remarkable political gains in the past thirty years, including the adoption of the Declaration on the Rights of Indigenous Peoples by the General Assembly of the United Nations in 2007, a health and social crisis is deepening within many indigenous communities. As The Falling Sky makes plain, this crisis is rooted in the symbolic violence exercised by the dominant society, which fails to recognize the value (rather than just the right) of being different and of living in a distinct human collectivity… It is, above all, a splendid story told by an exceptional man, who barely knows how to read and write. That the story was written down by an ethnographer who elected not to adjust his research to the canons of academia adds to its importance. The use of the first-person singular to tell the tale involves a fusion of authorial voices, a sign of mutual recognition and true friendship if ever there was one; it lends a musical quality to the resulting ‘heterobiography.’ Through their sonorous presence, the numerous beings evoked in the shamanic chant usher in the fertility of life as shamans see and feel it. What better way to entice readers away from everyday forgetfulness than to invite them to hear the forest’s vast and timeless symphony?”—Laura Rival, The Times Literary Supplement

“One of the first and best autobiographical narratives by an indigenous lowland Amazonian… The book is a mix of autobiography, history, personal philosophy, and cultural criticism of whites for their destruction of the world, worship of the material, and lack of spirituality and vitality… The book is not only finely detailed and full of challenging philosophical points, it also contains much humor… Ultimately, it is Kopenawa’s voice that tells us who he is, who his people are, and who we are to them. It is complex and nuanced; I’d go so far as to call The Falling Sky a literary treasure: invaluable as academic reading, but also a must for anyone who wants to understand more of the diverse beauty and wonder of existence.”—Daniel L. Everett, New Scientist

“Kopenawa provides a fascinating glimpse into his life as well as into Yanomami cultural beliefs and practices, setting his story against the various threats the Yanomami people and their forest have faced since the 1960s… Kopenawa’s story is eloquent, engaging, and thought-provoking, exuding heartfelt wisdom. This extraordinary and richly detailed work is an outstanding explication of the Yanomami worldview as well as a plea to all people to respect and preserve the rain forest.”—Elizabeth Salt, Library Journal (starred review)

“This engaging text, the autobiography of Yanomami shaman and activist Davi Kopenawa, translated with some prefatory remarks, appendixes, notes, and additional biographical comments by anthropologist [Bruce] Albert, offers a valuable insider perspective on a much-studied Amazonian society, with rich details on myth and religious practices, including shamanic initiation. Albert frames this story with a half-century-long history of exploitation by Westerners, ranging from anthropologists to government officials and developers. Kopenawa’s direct experiences with, and assessment of, his white interlocutors is often charged with a well-justified anger, but through the course of his personal history the need for mutual respect and, where appropriate, collaboration is likewise made evident. The text offers a trenchant critique of the characterization of the Yanomami as humanity’s primordial ‘fierce people,’ highlighting the beauty and virtues of these people while reminding readers of Western cultural and ecological destruction in the Amazon (an exceptionally virulent brand of fierceness).”—C. J. MacKenzie, Choice

“I have just read your manuscript and am enormously impressed by this work of such powerful methodological interest and prodigious documentary richness. It wholly captivates the reader yet is simultaneously so complex, raising so many questions.”—Claude Lévi-Strauss, letter to Bruce Albert, July 10, 2006

“The words of the Yanomami shamans are powerful: they conjure up another world responsible for this one. Davi Kopenawa proves it for us. Not only do his words give us an unparalleled experience of the life of the Yanomami, but his moving description of their struggle to save the forest and themselves from destruction by the whites reveals the modern tragedy of indigenous peoples in ways we never imagined.”—Marshall Sahlins, University of Chicago