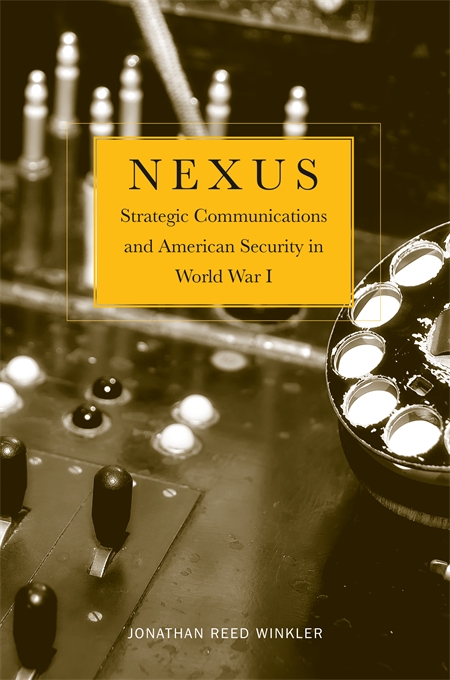 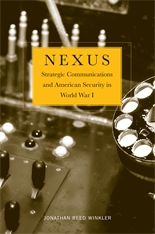 “Thanks to Winkler’s careful work in military and civilian records, the book recounts in detail how a small group of American officials, spurred into action by the war emergency, tried to increase their nation’s control over global information networks… Winkler’s outstanding original research and clear writing make Nexus a valuable contribution to the history of information warfare, a subject that will almost certainly attract greater interest in the years to come.”—Mark R. Wilson, Business History Review

“This is a well-researched and important study assessing the role of global communication technologies and their control in wartime. It provides a cogent analysis of how the need to develop our own cable and radio links drove government policy. And it adds to the slowly growing number of studies thatexamine the increasingly central role of rapid and secure communication in both diplomatic and military policy in the 160 years since the development of the electric telegraph.”—Christopher H. Sterling, Journal of American History

“This story involves not only the history of communication, but also diplomatic, military, technology, and business history. While investigating interrelated developments in these fields, Winkler recreates the global communication network in place at the outbreak of the war and shows how each side engaged in the first real information war. Finally, he analyzes U.S. officials’ reaction to this new warfare and the policies they adopted to redress this nation’s shortcomings in the field of global communication. A well-researched, high readable work that makes a valuable contribution to a number of historical areas.”—T. A. Aiello, Choice

“In a landmark book, Winkler shows how most of the issues of the information economy—and its handmaiden, information security—were thrust upon the United States by World War I, when the nation found that British domination of the cable infrastructure, combined with London’s strategic grasp of its possibilities, reduced the U.S. to a humiliating dependence. How America tried to escape from the shackles of the British monopoly on communications makes a fascinating tale.”—Richard R. Fernandez, The Belmont Club

“As children of the information age, we appreciate the vital role of communications in national security planning. Jonathan Winkler takes us back to an era when the principles of informational warfare were first being thrashed out—in foreign ministries, in military headquarters, under the sea, and in the atmosphere. A fascinating tale of technology, diplomacy, and intrigue.”—H.W. Brands, University of Texas, Austin

“The fight for mastery of global telecommunications in the midst of the First World War is a subject of the deepest importance that had lain undiscovered until now. Jonathan Winkler has reconstructed the complex nexus of strategy, technology, and diplomacy with admirable clarity. It is a fundamental contribution that demonstrates the need for a whole new field of historical inquiry.”—Matthew Connelly, author of Fatal Misconception: The Struggle to Control World Population

“Winkler tells a story that should figure into all future accounts of U.S. participation in World War I.”—Ernest R. May, Harvard University

“By examining the ways in which World War I sparked official recognition of the commercial and strategic importance of cable and radio, Winkler illuminates a vital, but neglected, chapter in the history of global communications. This is a thoroughly researched, well-written, and engaging study.”—Emily S. Rosenberg, University of California, Irvine