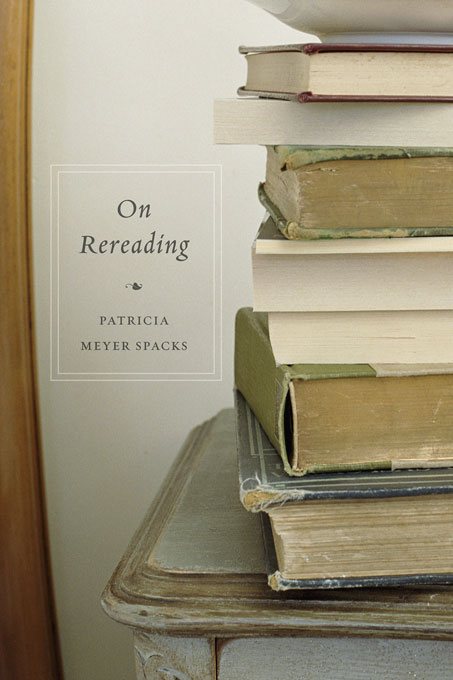 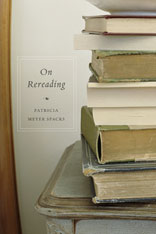 “[A] remarkable meditation… Words such as ‘joy,’ ‘enjoy’ and ‘pleasure’ recur throughout the study; and while it might be refreshing in itself to hear such unfashionable words bandied about, Spacks’s true achievement lies in her insistence that they belong in the same world as more rigorously analytical terms and ideas… The analysis of pleasure, the pleasure of analysis: the twinning of these qualities underlies the most illuminating chapters of On Rereading, in which Spacks revisits works that once bored or repelled her, and ones for which her initial enthusiasm may have been ephemeral.”—Bharat Tandon, The Times Literary Supplement

“Patricia Meyer Spacks, who has taught literature at a number of distinguished colleges and universities over the past half-century—she is now the Edgar Shannon Professor of English Emerita at the University of Virginia—is something of a rarity among those who practice her trade these days: She reads for pure pleasure as well as for professional obligations, and she understands that pleasure is a legitimate, valuable goal in and of itself. Reading fiction has the power to expose one to large truths about human existence, but there is more to it than that… An excellent book.”—Jonathan Yardley, The Washington Post

“A book remains the same through time, but the context and personality of the reader don’t. Whether the consequence is nostalgia or embarrassment can be the luck of the draw. Some of the most interesting material in On Rereading concerns the bewilderment that can occur upon revisiting a once-beloved work and finding that the thrill is gone.”—Scott McLemee, Inside Higher Ed

“An absorbing, detailed account of books [Spacks] has reread over the years.”—Fatema Ahmed, Prospect

“[An] erudite and often surprising book… There is plenty to think about and argue with throughout this book… On Rereading brings a sharp, questing academic mind to its task. It is also deeply personal, honest, clear and engaging.”—Agnes Nieuwenhuizen, Weekend Australian

“An interesting hybrid of literary criticism and memoir… Spacks’s book, particularly her first chapter which I think is her best chapter, is worth the read if you’ve ever been interested in this question of why we read the same books over and over. But, fair warning, you’ll probably feel the urge to pick up an old favorite as soon as you’re done.”—Aia A. Hussein, Austenprose

“Spacks is charming and pellucid in recounting her sense of why we reread a book and how frequently we find the experience a shock to our expectations.”—Eric Banks, Bookforum

“Spacks questions many of her past literary judgments with candor and harsh self-criticism, emphasizing that rereading explores ‘new ground’ and is never dispassionate… An insightful and compelling book that will appeal to all fans of literature and students of literary theory.”—Erica Swenson Danowitz, Library Journal