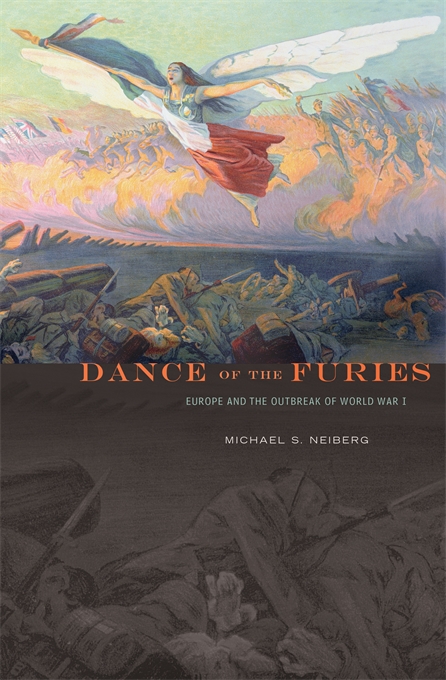 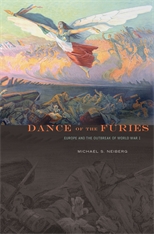 Dance of the Furies

Europe and the Outbreak of World War I

“Powerful and original… Michael Neiberg’s Dance of the Furies examines what has been a bitterly contentious subject ever since: how the war began.”—Geoffrey Wheatcroft, The New York Review of Books

“Neiberg’s story is a sober and chastening one, since it shows how wars take on a life of their own, in that the moral pollution they trigger lingers long after the diplomats have finished with the peace treaties supposedly ending hostilities… When Georges Duhamel, the surgeon and flautist, won the Prix Goncourt in 1919, it was for a book sardonically entitled Civilization. Now we know, Paul Valery said, that our civilization is mortal; and savage too, he might have added. The outbreak of war in 1914 helped make it so, and Michael Neiberg’s fine book shows what a disaster that moment was, a moment when the population of Europe was frogmarched into an unnecessary war, and learned that the only way to win it was with hatred and violence of a depth and intensity the world had never seen before.”—Jay Winter, The Times Literary Supplement

“The agony of the ending of peace is palpable, and the ecstasy of being at war becomes manifest in Neiberg’s analysis of how the people of Europe responded to the start of hostilities. Neiberg tours Europe in a masterly survey of the shifting popular mood, telling the story of ‘the millions of people who neither desired nor expected a war…but who nevertheless fought that war to the bitter end.’ While there was little of the fabled war enthusiasm, Neiberg shows how the ‘sadness and resignation’ that characterized the sudden end to a century of peace transmuted into rabid hatred of belligerent and barbarous enemies and a belief in the justice of the national cause. Although by the end of 1914 the broad public was already disenchanted, they were committed to fighting on, turning a politicians’ war into a struggle of peoples. In this outstanding work of reinterpretation the people of Europe speak for themselves.”—William Philpott, The Wall Street Journal

“Neiberg takes issue with the notion that pre-1914 Europe was a ratpack of competing nationalisms just itching to get at each others’ throats. Using a wide range of sources—newspapers, politicians’ speeches and private diaries—Neiberg shows convincingly that most Europeans just wanted to get on with their increasingly prosperous lives in peace. It was only when the prearranged plans of the small group of warmongers—principally German—kick-started the war that a horrified public was galvanized into patriotic belligerency, with results that, a century on, are with us still.”—Nigel Jones, Literary Review

“This book stunned me, in a positive way… For those versed in public choice economics, and behavioral public choice, Neiberg’s account is much more intuitive than the popular analyses one often hears. Definitely recommended.”—Tyler Cowen, MarginalRevolution.com

“Dance of the Furies becomes at once the new pinnacle in brief studies of the coming of the First World War… Dance of the Furies is far-ranging, adroitly written, and consistently fascinating… [Neiberg] uses an incredibly wide array of contemporary sources to shore up his point that when the Austro-Hungarian Archduke Franz Ferdinand was assassinated by Serbian teenager Gavrilo Princip in Sarajevo on June 28, 1914, virtually nobody thought the event would lead to general war… Dance of the Furies brings its readers right to the edge of that Armageddon but does not plunge. We hear tales of bank collapses and hate-propaganda, and we see the idealism of all combatants quickly shredded, but the epic carnage and attrition, the big-scale generalship and diplomacy, all lies ahead when this superb volume concludes. Instead what Michael Neiberg has given us is a vast chorus of disbelieving voices, the shopkeepers, professors, poets, and farmers of half a dozen countries voicing their increasing alarm as their nations slipped toward the unthinkable. Assembling and synthesizing such a vast amount of material would be impressive enough; that Neiberg makes it all so darkly compelling is testament to a writing talent the discipline of history badly needs. Future studies of the First World War by this author will be eagerly devoured.”—Steve Donoghue, Open Letters Monthly

“Neiberg expertly mines letters and diaries of European and American diplomats, authors, journalists, and expatriates to show that among ‘ordinary people,’ no one wanted WWI… Neiberg illustrates how a select group of men in Austria-Hungary, and in Germany, used the assassination to advance their expansionist programs.”—Publishers Weekly

“This is an important book that contradicts one of the great calumnies of 20th century history, that ordinary people all over Europe in 1914 were such idiots they welcomed war. Neiberg argues the reverse, that there was no stomach for a fight, which no one much expected. Certainly he suggests people were patriots but they were not all itching to take revenge for territory lost or ancient insults. This doesn’t mean they didn’t accept the need to keep fighting when the war became a mincing machine, but Michael Neiberg distinguishes between endurance and enthusiasm. For anybody brought up on the idea the generation that died on the wire in Poland, Passchendaele and Palestine and in the trenches of the Western Front welcomed the opportunity, this is a challenging book.”—Stephen Matchett, Weekend Australian

“In this important book, Neiberg adds greatly to our understanding of the popular mood and political climate of the fateful year in which the twentieth century really started. Drawing on an impressive range of contemporary accounts, he explains convincingly how Europeans metamorphosed into committed belligerents only after their armies had crossed international borders and the reality of modern war—invasion, atrocities, mass casualties—reached civilians on the home front.”—William J. Philpott, author of Three Armies on the Somme

“Dance of the Furies is a major contribution to our understanding of the Great War’s origins and nature. Well researched and well written, this book has a simple central thesis: the peoples of Europe neither expected nor desired war in 1914. But they did believe their nations’ causes were just, and their nations’ sacrifices must be avenged. Within weeks what began as a cabinet war, initiated by a small group of men, became a total war whose passions defied compromise and whose hatreds left a legacy of militarism, racism, and totalitarianism.”—Dennis Showalter, author of Tannenberg: Clash of Empires