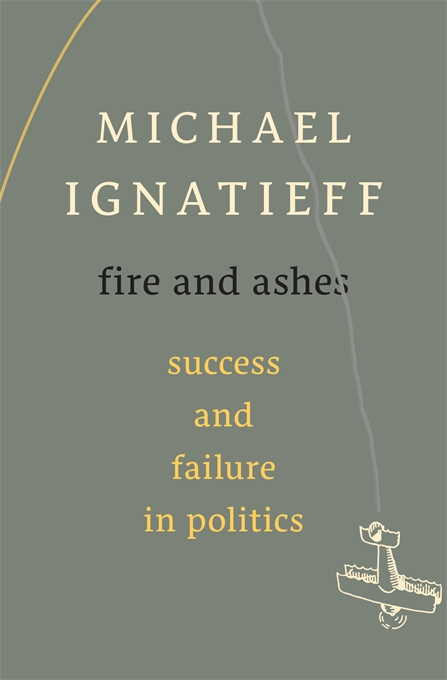 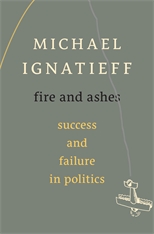 Success and Failure in Politics

“I’ve never read a politician’s account of seeking and maintaining power that has quite the level of candor I found here—beginning with the admission that ‘there are few rewards for candor in politics.’”—Barton Swaim, The Wall Street Journal

“Engagingly frank… Ignatieff has written an elegant, thoughtful, candid book explaining why he tried, and how he failed, to get to the top of the greasy pole.”—Peter Clarke, Financial Times

“It is really a cautionary tale about the perils awaiting thoughtful men who are moved to act out the ancient dream of bringing bright ideas into the fog of political life… Fire and Ashes leaves one with a sense of loss and regret, not so much at Ignatieff’s failure at an enterprise that, by all accounts, including his own, was doomed from the outset. No, the regret one feels is for the gradual death of civility in politics that his book so vividly chronicles.”—Paul Wilson, New York Review of Books

“[A] compelling and curiously moving account of [Ignatieff’s] traumatic experiences near the very summit of Canadian politics… Ignatieff wanted to win the top job the right way, with a clear electoral mandate. Yet part of the poignancy of this memoir comes from our subsequent knowledge, and his, that it was never going to happen… He reflects on this disaster with good grace and minimal self-pity—just enough to let us know how much it hurts… For a clear-eyed, sharply observed, mordant but ultimately hopeful account of contemporary politics this memoir is hard to beat.”—David Runciman, The Guardian

“The best book about what it feels like to be a politician since Richard Ben Cramer’s What It Takes.”—David Brooks, The New York Times

“Reading Michael Ignatieff’s reflective and somewhat wistful book, stocked with practical and philosophical ruminations inspired by his temporary move from academia to Canadian politics, made me wish he had succeeded in becoming his country’s prime minister. Ignatieff’s constructive approach to politics, like his commitments to democracy and social justice, remains admirably untainted by the bitter experiences he describes. Yet his account makes clear why his noble adventure as leader of Canada’s Liberal Party ended in failure…Fire and Ashes provides a deeply thoughtful if sometimes elusive account of its author’s experiences as an intellectual in politics…He’s a teacher at heart and manages in Fire and Ashes to turn his irritation into an instructive lesson about the importance of ‘standing’ in politics. His analysis of whether a politician is given a hearing, or denied it by having his or her legitimacy undermined in advance, is the most important insight in his book…Perhaps it takes someone whom the voters have cast aside to offer a truly credible and heartfelt brief for democracy.”—E. J. Dionne Jr., Commonweal

“Long after the details of the 2011 Canadian election are forgotten, anyone interested in democratic politics will be reading this book. As both an access-all-areas insider’s guide to the machinations of power and a powerful account of (and, just as fascinatingly, an example of) the weird psychology of ambition, it is a riveting read.”—Caspar Melville, New Humanist

“Emotionally candid and humble, Ignatieff provides unadorned glimpses of political life, in which the art of dissimulation collides with the intellectual’s impulse for truth… Ignatieff’s elegant composition may be his finest since his biography of Isaiah Berlin in 1998.”—Shefa Siegel, Haaretz

“[A] brutally frank and at times self-lacerating book… Ignatieff does have something important to teach us… In Fire and Ashes he presents a defense of politics that cannot be ignored. Rather than scorning politicians, it would be more sensible to lower our expectations of what politicians can hope to achieve. This is the true moral of the story that Ignatieff tells.”—John Gray, The Independent

“[Ignatieff] describe the 35 days of his disastrous 2011 campaign as the happiest period of his political journey. Brave man. Most of us find fighting a losing campaign a truly awful experience. Having gone through this myself I could no more write about it than I would contemplate doing it all again. I would fear that my account would reek of self-pity, self-regard and self-justification. It is a measure of Ignatieff’s character that such sentiments rarely leak onto his pages. Overall, this is a brave and mostly convincing case for the young to consider a life in democratic politics.”—Chris Patten, The Tablet

“[Ignatieff] has written not just a good book, but an extraordinary one. Fire and Ashes is a brilliant testament to the state of our politics, a cautionary tale about the perils, and pleasures, of political life and a must-read primer for anyone contemplating a political career.”—Robert Collison, The Toronto Star

“Michael Ignatieff chronicles why he entered political life, what it takes to be a successful politician, and what it feels like to fail miserably in the political arena… Ignatieff may not have been a wildly successful politician himself, but he is a terrific writer and a keen observer of politics. And this memoir about politics should be required reading for anyone who loves or cares about political life in Canada.”—Peter McKenna, The Vancouver Sun

“Fire and Ashes is at times self-flagellating and self-exculpatory, frank and evasive. Above all, it attempts to extract meaning from failure. The tone is more sorrowful than angry. Ignatieff casts himself as a fount of hard-won political wisdom who, despite having endured a bruising political education, remains a champion of the democratic process.”—Evan R. Goldstein, The Chronicle of Higher Education

“[Ignatieff] writes so eloquently in Fire and Ashes about the attributes needed to win in politics because he knows all too well that his lack of them meant that his return home was never fated to culminate in his becoming Canada’s 22nd prime minister.”—Stephen Holt, Canberra Times

“Ignatieff offers a cautionary tale for public intellectuals who would be politicians. The Toronto native, currently a professor at the University of Toronto and Harvard’s Kennedy School of Government, served as head of Canada’s Liberal Party until 2011, when he lost his own seat in the party’s worst showing in its history. Ignatieff had left Harvard in 2005 to enter Canadian politics and swiftly rose through the ranks to become leader of his party, on the cusp of becoming the next Prime Minister, only to face a huge electoral defeat and million-dollar campaign debt. Wised up to the rough and tumble of political life, he reflects on what he did right and wrong, and shows why getting elected, and then enacting reforms, is hard work… This thin volume could have easily been a vanity book, but it’s more than that. An erudite and civilized man, Ignatieff ends his tale with surprisingly upbeat advice to aspiring politicians.”—Publishers Weekly

“Michael Ignatieff is an extraordinary person. His memoir is a unique combination of learning, compassion, and wisdom brought to bear on the mess and grind of politics. He writes beautifully, and honestly. I know no book which gives a clearer sense of what it feels like to fight for a vision amidst the flaws and potential of our modern democracies.”—Rory Stewart, MP, author of The Places in Between

“The shelves are full of memoirs written by successful politicians, painting their careers with the rosy glow of battles won. Michael Ignatieff tells a very different tale: of humility, self-discovery, and human connection. It is a book that plumbs the essence of politics, one that all voters and the leaders who would represent them should read.”—Anne-Marie Slaughter, Princeton University

“A distinguished intellectual, writer, journalist, and academic gives up his library and his chair at Harvard to pursue a political career at the highest level and for six years he experiences the passion and the fever, the enthusiasm and the intrigue, the failure and the success of party politics in the vast Canadian scene. Six years after that immersion in political life, he goes back to his library, he does some thinking, and he offers us an exceptionally insightful and honest account of that adventure. This book is a compass that will help the reader find his or her way in the dizzying maze that politics has become in the great modern democracies.”—Mario Vargas Llosa

“This book is fantastic. The insights into the realities of democratic politics are not only subtle and intelligent but I believe they are of extraordinary importance to anyone trying to understand the possibilities of democracy and the modern life of politics.”—Marc Stears, University of Oxford