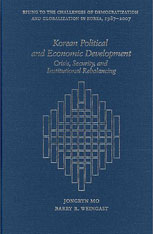 How do poor nations become rich, industrialized, and democratic? And what role does democracy play in this transition? To address these questions, Jongryn Mo and Barry R. Weingast study South Korea’s remarkable transformation since 1960. The authors concentrate on three critical turning points: Park Chung Hee’s creation of the development state beginning in the early 1960s, democratization in 1987, and the genesis of and reaction to the 1997 economic crisis. At each turning point, Korea took a significant step toward creating an open access social order.

The dynamics of this transition hinge on the inclusion of a wide array of citizens, rather than just a narrow elite, in economic and political activities and organizations. The political economy systems that followed each of the first two turning points lacked balance in the degree of political and economic openness and did not last. The Korean experience, therefore, suggests that a society lacking balance cannot sustain development. Korean Political and Economic Development offers a new view of how Korea was able to maintain a pro-development state with sustained growth by resolving repeated crises in favor of rebalancing and greater political and economic openness.