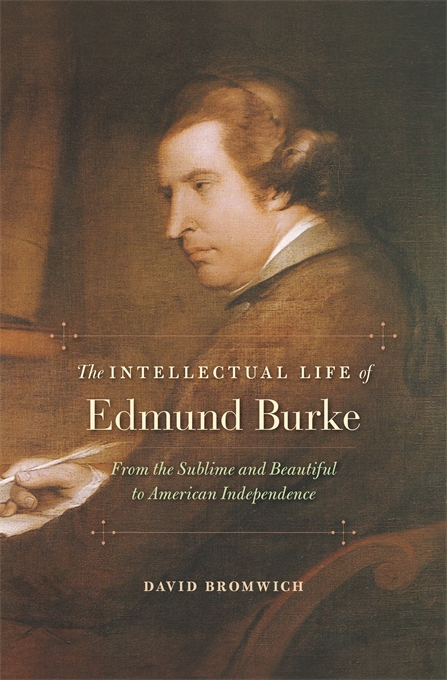 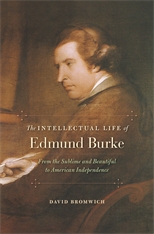 The Intellectual Life of Edmund Burke

From the Sublime and Beautiful to American Independence

“The Burke David Bromwich presents in his new book The Intellectual Life of Edmund Burke is certainly a formidable figure, but one who resists recruitment for twenty-first-century causes. It is his elusiveness that makes him a live presence; he was a traditionalist and a progressive, an enlightened critic of Enlightenment run amok, a secular thinker who insisted on the indispensability of religious faith. He thought it pointless to insist on rights whose enforcement would bring disaster, as when British governments asserted their right to tax the colonies and brought on a revolutionary war; and yet he had no doubt about the reality of rights. Burke was an eighteenth-century Whig, not a twenty-first-century liberal or conservative, but both of the latter can engage with him with advantage. David Bromwich has been thinking about him for more than a quarter of a century, and by now has an unrivaled sensitivity to the workings of his mind; like Burke, Bromwich is a formidable critic, ranging over politics, literature, higher education, and much else, and on every page of Edmund Burke, one can feel him responding to Burke across the whole range of Burke’s interests as if he was in the room with him… [Bromwich’s] focus on the first three decades of Burke’s life as a thinker, writer, and political actor yields riches… We shall have to wait for the second volume of this engrossing account to see how David Bromwich handles the Burke who responded so differently to the second great revolution of the late eighteenth century. His penetrating first volume makes us impatient to see what he will say.”—Alan Ryan, The New York Review of Books

“[Bromwich] gives us a figure who may be unknown to readers familiar with Burke only from ‘Reflections on the Revolution in France’ or his reputation as modern conservatism’s founding father. Bromwich’s Burke is one for whom ‘ordinary feelings such as trust, though they have a Christian correlative, themselves supply a sufficient groundwork of moral conduct.’ Burke is moved more by a universal sympathy for human struggle than by religion or patriotism… Though his attention throughout is on Burke’s moral psychology, Bromwich also highlights the literary character of his thought, including his debts to Milton and Shakespeare… In Burke’s politics there was room alike for elite rule and street demonstrations of the Tea Party or Occupy Wall Street variety. This balance of familiar and strange, Burke’s enlightened humanity and his intricate understanding of power, make him well deserving of the extensive treatment he has lately received—and especially of the justice David Bromwich has rendered him in showing Edmund Burke in the most unexpected of lights.”—Daniel McCarthy, The New York Times Book Review

“It is David Bromwich’s aim in The Intellectual Life of Edmund Burke that people should know a good deal more about what Burke actually said and wrote… Bromwich’s patient and subtle exposition is a continuing delight. After reading this first volume, several major misreadings of Burke and a more general ignorance of his arguments and actions will not be possible, or at any rate won’t be legitimate… The Intellectual Life of Edmund Burke is both indispensable and unputdownable, and with its companion volume will surely form a lasting landmark.”—Ferdinand Mount, London Review of Books

“In The Intellectual Life of Edmund Burke: From the Sublime and Beautiful to American Independence, a searching and profoundly meditated account of the earlier part of Burke’s career, David Bromwich is not much interested in finding a [political] label: he does something much more valuable, which is to evoke with tremendous accomplishment the complexities of Burke that are always bound to resist any such attempt… The concluding volume of his outstanding intellectual Life of his subject will be eagerly awaited by many.”—Seamus Perry, The Times Literary Supplement

“[A] recent biographer of Burke calls him the father of conservatism. So a reappraisal of his early works is welcome. David Bromwich, a professor at Yale University, has written a history of Burke’s thought until American independence; a more liberal Burke emerges from this book… Burke continued to fight for liberty later on in life. He backed Americans in their campaign for freedom from British taxation. He supported Catholic freedoms and freer trade with Ireland, in spite of his constituents’ ire. He wanted more liberal laws on the punishment of debtors. He even pushed to curb the slave trade in 1780, a quarter of a century before it was abolished.”—The Economist

“Magnificent, beautifully written…[and] the most notable addition to a recent crop of books about Burke… [This] is an intellectual biography of the best kind. Bromwich seeks to convey ‘what it meant to think like Edmund Burke’ and to demonstrate the coherence and relevance of Burke’s moral and political vision. With a remarkable level of detail and sensitivity, Bromwich makes a virtue out of what others lament as problematic: the relationship between Burke’s political activity and his written works. Bromwich is convinced that people today can still learn from Burke, not as political partisans but as ‘thoughtful readers.’ In Bromwich’s hands, Burke offers better lessons about how to think than about what to think… It offers a revealing portrait of Burke’s mind.”—Iain Hampsher-Monk, Foreign Affairs

“Brilliant… Bromwich’s intellectual acuity provides key insights into how aesthetics and politics fused [in Burke]… Bromwich’s first volume brings the reader up to the eve of Burke’s speech on Fox’s India Bill (1783), and we will have to wait for volume two to deal with the impeachment of Warren Hastings, Burke’s recoil from the momentous events of the French Revolution, and his near despair at impending crisis in Ireland. On this showing that volume will be eagerly awaited.”—Luke Gibbons, The Irish Times

“In The Intellectual Life of Edmund Burke, David Bromwich sets aside the conventional views of Burke—the eloquent opponent of radical ideology—to track the formation of his outlook and explore his early career… The Intellectual Life of Edmund Burke most of all reminds us that Burke’s understanding of the moral psychology guiding politics sprang from his engagement with both ideas and practical questions. Certainly a better grasp of Burke’s early thought and the political turmoil of his time will prepare us for a fuller understanding of his response to the dramatic events of the late 18th century—not least, the outbreak of the revolution in France and the implications Burke saw for England and for liberty itself.”—William Anthony Hay, The Wall Street Journal

“All good biographies are called magisterial, but David Bromwich’s The Intellectual Life of Edmund Burke: From the Sublime and Beautiful to American Independence actually merits the adjective. Edmund Burke was a rare figure: a working politician who was also one of the great thinkers of his, or any, time… Bromwich’s book, the first in a two-part biography, does justice to both the politics and the thought, showing how Burke’s principles—a hatred of violence and a love of liberty—emerged from political and historical circumstances. Meticulous in its research and elegant in style, The Intellectual Life of Edmund Burke is a masterpiece of intellectual history.”—Anthony Domestico, The Christian Science Monitor

“Magisterial… It is the best in-depth, comprehensive recent analysis of Burke’s thought—plus it is an enjoyable read… Bromwich’s work reveals a Burke who is politically principled and (more or less) philosophically consistent, but who does not conform conveniently to our present-day conceptions of right or left.”—Drew Maciag, The Chronicle of Higher Education

“Probing and subtle… Helps us glimpse the sources of Burke’s surprising longevity… Bromwich’s Burke is not the evasive pragmatist who has been conscripted as the founding father of conservatism… Bromwich’s biography promises to be the fullest and most responsibly sensitive account of both Burke’s consistency and his ductility that we will ever have.”—David Womersley, Standpoint

“Magnificent… Bromwich masters and then mines [the copious private correspondence] with a degree of skill and discrimination I haven’t seen in a Burkean study since the late 1970s… The sheer, marvelous plenitude of the material Bromwich brings into his narrative quickly broadens the story to take in the full ambit of Burke’s public intellectualism… Bromwich thoroughly understands how clearly the man is revealed in his writing, and one of the greatest pleasures in The Intellectual Life of Edmund Burke is the regularity with which we get chunks of Burke’s own intensely good prose. The man was a tireless student of human nature and one of the sharpest observers of man the political animal since Tacitus. And his descriptions of political creatures are uniformly so perceptive that any 21st century [reader] will find them instantly recognizable… Bromwich might not be doing the standard finances-and-family run-through of a biography, but he nevertheless ends up painting as vivid a personal portrait as any biography-reader could want… [An] irreplaceable study, which inadvertently underscores the disquieting extent to which we are all living in a political continuum of Burke’s shaping. When this volume is completed by its sequel, we’ll have a benchmark of Burke studies fit to last a century.”—Steve Donoghue, Open Letters Monthly

“Bromwich restores to view the complexity of Burke’s thinking about politics in the decades culminating with the American war… Cascades with insights into Burke’s antipathy toward the conflict with America, his limited sympathy for reform but tolerance for popular resistance, and his neglected engagement in such issues as protesting the slave trade… Identifying Burke’s ‘politics’ with the totality of his public and private writings, Bromwich displays a formidable grasp of Burke’s public ‘performances,’ his correspondence, as well as myriad scattered writings and speeches… Among its considerable merits, The Intellectual Biography of Edmund Burke does not lapse into the potted generalizations of some intellectual history, nor appeals to Burke as bedrock Tory (or for that matter, radical Irishman)… The Intellectual Life of Edmund Burke instead constitutes a steely polemic for the possibility of sustained thought amidst heated controversy and the minutiae of events, posing searching questions about the role of intellectual life in shaping political action.”—John Owen Havard, Eighteenth-Century Studies

“Drawing on Burke’s correspondence, as well as his public writings and speeches, Bromwich presents the portrait of a serious thinker who cannot be easily categorized as either conservative or liberal—Burke spoke out about abuse of power, even supporting the American colonies, yet at times seemed to distrust democracy… Bromwich has brought his considerable research and writing skills together to present a readable, thorough picture of Burke’s earlier years.”—Nancy R. Ives, Library Journal

“Edmund Burke was famed for weaving into arguments like a serpent; David Bromwich displays equal finesse, skill, and relentlessness in moving through the complexities and sheer volume of Burke’s writings. The drive, fluency, and intelligence of Bromwich’s analysis allow the reader to see Burke as that rare animal, a prime thinker who was also a practicing politician, a man caught up in a time when both varieties of democracy and new forms of empire were violently and contentiously on the rise.”—Linda Colley, author of The Ordeal of Elizabeth Marsh: A Woman in World History

“The Intellectual Life of Edmund Burke shows, in a very enlightening way, how Burke returns over and over to the theme of the relations between a politician and ‘the people’ and the gradual hardening of his insistence that while popular views must be taken account of, they must not determine how a conscientious politician acts. Bromwich reads Burke with care and depth and displays a range of learning and insights. His approach to Burke as a moralist in public life is original.”—Peter Marshall, editor of The Writings and Speeches of Edmund Burke, Vols. V–VII