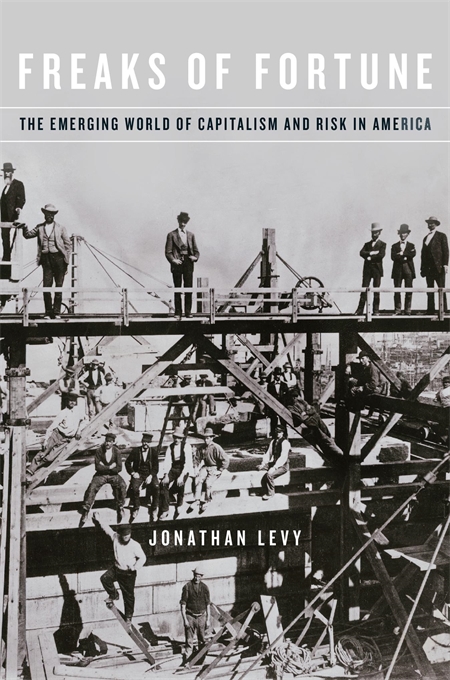 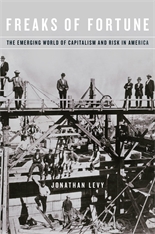 The Emerging World of Capitalism and Risk in America

“Levy sets himself the task of writing a history of economic and social risk in America in the 19th and early 20th centuries and, along the way, of showing that big government didn’t just come from nowhere. It is an indispensable absorber, he suggests, of the shocks of the free market… Freaks of Fortune is a formidable work of scholarship—hats off to the author for the depth and breadth of his research.”—James Grant, The Wall Street Journal

“[Levy] not only tells a historical tale but also usefully illuminates the background to two first-magnitude issues confronting the American economy and American economic policy today: to what extent should the government, as opposed to private insurers, absorb the financial risks that we choose not to bear individually? …And within the private sector, including not just private insurance companies but also for-profit firms in other industries, how do the rewards that firms’ owners and senior managers receive relate to the risks that they are personally bearing? …Anyone concerned with these important questions can usefully—and enjoyably—learn from Levy’s fine-grained yet sweeping account… Corporate America has evolved a labor market that treats top executives differently from other people not just in the amount paid to them but in their exposure to downside risk. For three decades now, our society has been making the consequences of unemployment ever harsher for ordinary citizens. The theory, apparently, is that facing the disastrous consequences of losing one’s job creates an incentive to work hard and well. At the same time, the theory applied to our top executives is that their incentive to good performance is not just the enormous upside potential of success but also the generous cushion provided in case of failure. Reading Jonathan Levy’s book leaves no doubt which theory is more consistent with traditional American values.”—Benjamin M. Friedman, The New Republic

“Engrossing account of the rise of the financial sector of the U.S. economy and the development of new tools for managing risk… Levy adds greatly to an understanding of risk in the American economy.”—D. A. Coffin, Choice

“Levy provides a fascinating glimpse into the history of financial risk. Looking at the years between the start of the 19th century and the beginning of the Great Depression, he outlines a shift in philosophy regarding risk and responsibility as workers became dependent on new financial systems. Insurance, savings accounts, and even mortgage-backed securities proliferated in an attempt to shift risk off the individual and onto a larger institution.”—Elizabeth Nelson, Library Journal

“A free-wheeling yet finely targeted history of capitalism and the modern financial industry, this study by Princeton historian Levy revolves around one specific concept—risk—while considering changing notions of liberty, justice, and human agency. Originally a mariners’ term for the possibility of a ship’s cargo being lost at sea, ‘risk’ became a defining feature of American commercial life as the free market expanded and industrialization radically increased the pace of economic change… Levy’s humane vision and his extensive knowledge of American law, economics, and politics turn what could have been a dry treatise into a fascinating portrait of a society in flux. The author sheds light on such topics as corporate profit-sharing and the ethical ramifications of futures trading, underscoring the extraordinary power of the ‘economic chance-world’ to create and destroy. Happenstance has always played an enormous role in human life, and the book explores society’s reaction to the realization that individuals are increasingly defined by the possibility that their station in life will dramatically rise or fall.”—Publishers Weekly

“A most informative and imaginative study of the many roles played by risk and the attempts to offset it in American economic development. Levy’s insights will substantially enrich our understanding of the American past.”—Stanley L. Engerman, author of Slavery, Emancipation, and Freedom: Comparative Perspectives

“Freaks of Fortune is a bold new synthesis of nineteenth-century U.S. history. It illuminates the transformation of fundamental ideas about property, personhood, liberty, and security as an agrarian market society became a modern industrial state. In showing how an omniscient God yielded authority to the emerging statistical science of probability, Levy casts unprecedented light on the culture of American capitalism, past and present. This is a powerful and important book.”—Jackson Lears, author of Rebirth of a Nation: The Making of Modern America, 1877–1920

“There is a brilliance of mind and story on every page of Levy’s intriguing and innovative study of American capitalism. Risk taking and risk management illuminate the economic history of the United States in the nineteenth century and prompt invaluable reflection on our own risky financial times.”—Walter Licht, author of Industrializing America: The Nineteenth Century