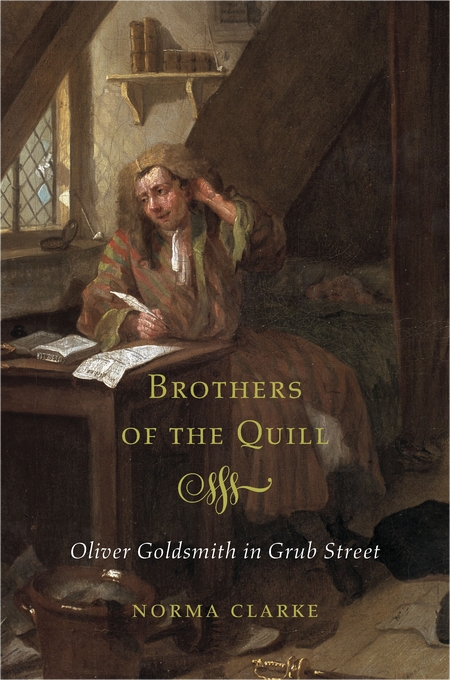 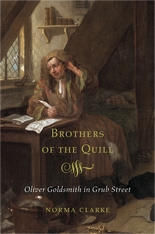 Brothers of the Quill

Oliver Goldsmith arrived in England in 1756 a penniless Irishman. He toiled for years in the anonymity of Grub Street—already a synonym for impoverished hack writers—before he became one of literary London’s most celebrated authors. Norma Clarke tells the extraordinary story of this destitute scribbler turned gentleman of letters as it unfolds in the early days of commercial publishing, when writers’ livelihoods came to depend on the reading public, not aristocratic patrons. Clarke examines a network of writers radiating outward from Goldsmith: the famous and celebrated authors of Dr. Johnson’s “Club” and those far less fortunate “brothers of the quill” trapped in Grub Street.

Clarke emphasizes Goldsmith’s sense of himself as an Irishman, showing that many of his early literary acquaintances were Irish émigrés: Samuel Derrick, John Pilkington, Paul Hiffernan, and Edward Purdon. These writers tutored Goldsmith in the ways of Grub Street, and their influence on his development has not previously been explored. Also Irish was the patron he acquired after 1764, Robert Nugent, Lord Clare. Clarke places Goldsmith in the tradition of Anglo-Irish satirists beginning with Jonathan Swift. He transmuted troubling truths about the British Empire into forms of fable and nostalgia whose undertow of Irish indignation remains perceptible, if just barely, beneath an equanimous English surface.

To read Brothers of the Quill is to be taken by the hand into the darker corners of eighteenth-century Grub Street, and to laugh and cry at the absurdities of the writing life.