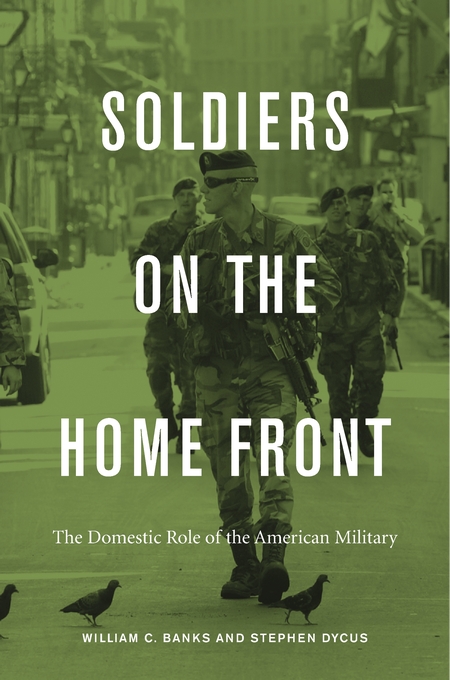 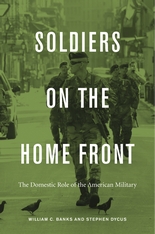 Soldiers on the Home Front

The Domestic Role of the American Military

“Offers an engaging refresher for anyone who happens to have forgotten the various guarantees of the Calling Forth Act and the statutory additions and exceptions thereunto. Soldiers on the Home Front also exhumes minority opinions from dissenting Supreme Court justices—texts that are staples in law school but that any layperson too can appreciate, with due reward… Implicit throughout this methodical yet lively volume is the running element of paradox in American governance; the paradox of freedom-versus-security is not unique to the American republic, but at the very least it elicits unique tension on these shores…As we continue our War on Terror, as we brace for major climatic events that might require domestic military intervention, as we suffer through the unchanging truth of the Kerner Commission’s ‘two societies,’ Banks and Dycus offer a lucid interpretive history of our peculiar Constitution, our statutory law, the righteous eloquence of minority court opinions, and the many reasons—both good and bad—devised by our attorneys general to justify military policing at home.”—Ted Scheinman, Pacific Standard

“This book is a useful survey of the role played by the American armed forces on U.S. soil… Soldiers on the Home Front is well-written and the authors raise some interesting questions about the future of the U.S. armed forces in American life.”—Fred L. Borch III, Army Lawyer

“A rich and thoughtful account of how the U.S. military has protected, supported, clashed with and occasionally undermined constitutional government in this country… More fundamentally, Soldiers on the Home Front reminds us that constitutional values are not self-enforcing, and are liable to be eroded in times of political stress or national emergency. Defending those values is the task of an alert, informed citizenry. This fine book should help.”—Steven Aftergood, Federation of American Scientists blog

“Soldiers on the Home Front is a highly recommended, thought-provoking and enjoyable read. A beginner to national security law can use it to build a comprehensive and solid foundation in understanding the various roles and legal issues associated with domestic military use.”—Kevin Cieply, Lawfare

“Professors Banks and Dycus have written the definitive account of the military’s role within the United States. They show that from the time of George Washington’s presidency through today’s war on terror, the military has served in domestic capacities as peacekeepers, jailors, judges, and investigators. Nuanced and beautifully written, this book will frame all future discussions about military actions on the home front.”—Erwin Chemerinsky, Dean of the School of Law at the University of California, Irvine

“It is likely that America will soon experience yet another disaster precipitated by terrorists, or a cyber-attack on decaying infrastructure, or an act of nature that will require rapid action to save lives and maintain order. To react in time, senior political authority will likely reach for the military. The decision to use the military to perform what are civil functions in normal times brings into sharp relief the tension between public safety and the need to ‘protect the integrity of our democratic institutions.’ In Soldiers on the Home Front, William C. Banks and Stephen Dycus examine this tension, giving readers a great deal to think about.”—General Montgomery C. Meigs, U.S. Army (ret.), University of Texas at Austin

“In this time of increasing concern about terrorism and other borderless threats, Banks and Dycus have contributed a valuable and timely review of the evolving role of the military in domestic security. It is required reading for serious students of national security and responsible citizens alike.”—Elizabeth Rindskopf Parker, former General Counsel of the National Security Agency and the Central Intelligence Agency