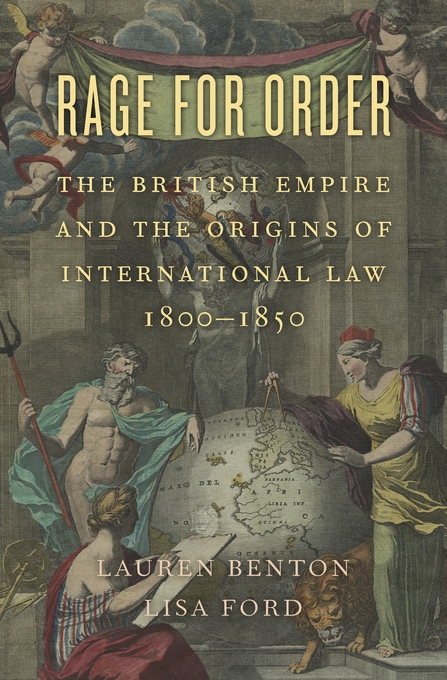 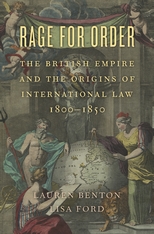 The British Empire and the Origins of International Law, 1800–1850

“Truly remarkable. Rage for Order is a stunning example of what can be achieved through a combination of erudition, conceptual innovation, and diligent work in the archives. This book describes in detail how the transformation of the global order that took place in the aftermath of the Napoleonic wars was driven by legal reform in the British Empire… Rage for Order offers a fresh account of nineteenth-century global order that takes us beyond worn liberal and post-colonial narratives into a new and more adventurous terrain, and adds significant detail and nuance to those intellectual histories that have already done much to complicate received views.”—Jens Bartelson, Australian Historical Studies

“Benton and Ford present a picture of law that was multi-centered and polyphonic but that nonetheless undergirded the expansion of British global power… This is a book which will receive a deservedly enthusiastic reception among scholars of law and empire, and which may well cause a stir with its more subversive trespasses into the field of international relations.”—Julia Stephens, British Studies

“Rage for Order is a book of exceptional range and insight. Its successes are numerous. At a time when questions of law and legalism are attracting more and more attention from historians of 19th-century Britain and its empire, but still tend to be considered within very specific contexts, its sweep and ambition are particularly welcome… Rage for Order is a book that deserves to have major implications both for international legal history, and for the history of modern imperialism. It succeeds in positioning law at the very center of British imperial government and imperial political thinking in a way that future work will, or at least should, find impossible to ignore.”—Alex Middleton, Reviews in History

“This book is a major achievement. Benton and Ford provide a powerful new way of understanding the global reach and effects of modern British imperialism. By connecting projects of colonial governance with new visions of global legal ordering, they offer a bold rethinking of the imperial context for the emergence of modern international law.”—Robert Travers, Cornell University

“The authors go deep into the archives to reveal the crucial interactions of countless colonial governors, crusading ship captains, misguided magistrates, inquisitive imperial commissioners, and frustrated Westminster bureaucrats whose words and deeds collectively constituted a nascent global legal order. By telling the often marvelous stories of law’s minions rather than its mandarins, Benton and Ford have done nothing less than help us understand the shambling character of our own international legal order as it arose out of empire two centuries ago.”—Paul D. Halliday, University of Virginia

“Benton and Ford marshal a vast array of archival evidence to shed new light on the development of law within and at the edges of the British Empire. They show that political and military activities were saturated with legal claims and that many and often competing actors—merchants and missionaries, sailors and convicts, middling officials and local elites—contributed to a ‘new vernacular imperial constitutionalism,’ with profound and unexpected consequences for international law.”—Jennifer Pitts, University of Chicago