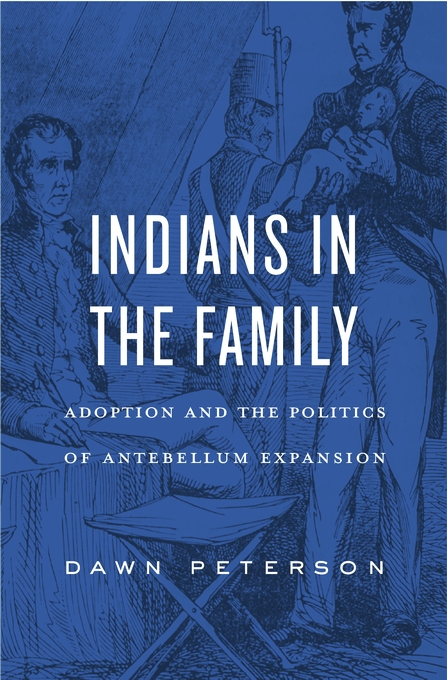 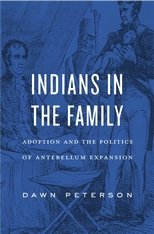 Indians in the Family

Adoption and the Politics of Antebellum Expansion

“Peterson has unearthed the history of keenly instinctive Indian families placing their children in white settler families with the goal of having their children gather vital information they could use later to increase economic and territorial development… Thank you, Dawn Peterson, for your meticulous research that reveals the resiliency of the early Indian families as they grappled in desperation with how they would survive encroaching white settlers and government. This rich history brings more pride in our ancestors who sacrificed years away from their children knowing in the end that this act would benefit their Indian nations.”—Sandy White Hawk, American Indian Culture and Research Journal

“Dawn Peterson’s Indians in the Family is not only a timely reminder of how the current strategies of resistance to colonial hegemony have a long and complex history, it is itself a nuanced, rigorously documented, and beautifully written account of the quotidian tensions around race, property, assimilation, and gender that continue to influence both Indigenous studies and Native activism in the present.”—Joseph M. Pierce, Adoption & Culture

“Indians in the Family is both a nuanced history of the lives of Choctaw, Creek, and Chickasaw youths adopted into white households between the 1790s and the 1830s and an incisive investigation of Native politics and American expansion… Indians in the Family is an analytically ambitious book that begins from the premise that gender, indigenous agency, and racialization are essential to understanding the politics of American early national expansion and the entrenchment of racial slavery. The book balances its analytical rigor with attention to human subjectivity and how it shaped historical action.”—Catherine Jones, Civil War Book Review

“A clear strength of the book’s framing lies in Peterson’s ability to address the perspectives and intentions of Native individuals, kin networks, and nations in the narrative to reveal how and why they diverged from their white contemporaries in the United States… Understanding how southeast American Indian nations conceptualized and used education to advance their own interests is a critical step toward reexamining the diversity of Indigenous educational experiences.”—Rowan Faye Steineker, History of Education Quarterly

“Indians in the Family is an astounding work of historical and cultural investigation. Dawn Peterson has woven together an eye-opening, original account of prominent white Americans’ adoptions of Native children in late eighteenth- and early nineteenth-century America, revealing the nuanced, consequential, and often unsettling interplay between Indian youth and white wards, family lives and national politics, and American colonialism and indigenous self-determination.”—Tiya Miles, author of The House on Diamond Hill: A Cherokee Plantation Story

“Peterson’s book reveals the intricate—even intimate—connections between personal and public affairs, between slavery and Indian removal, and between Native American assimilation and resistance. Ambitiously researched and vividly written, Indians in the Family will become a landmark study reaching across a wide range of fields in American history.”—Daniel H. Usner, author of Indian Work: Language and Livelihood in Native American History