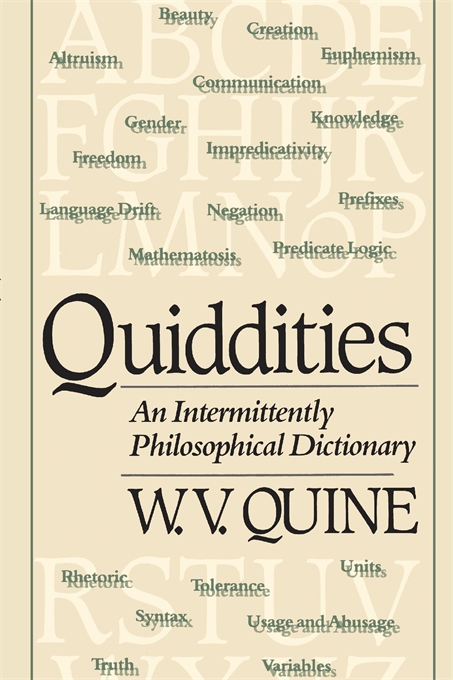 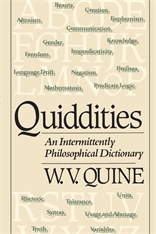 “A chief pleasure of reading these essays lies in their unexpected connections. A path through the side-alleys of cross-reference in Quiddities draws a revealing map of Mr. Quine’s interests… Few people apart from Mr. Quine could write a sensible and informative essay on Things in two-and-a-half pages.”—The Economist

“Mr. Quine is an intellectual—high, wide, and handsome—opening his mind to the rest of us here in a way that exemplifies the best of what a first-rate mind can do when aiming to explain himself to nonspecialists in mostly nontechnical language… Every phrase in this book is a condensation of ideas usually stated at greater length, but Mr. Quine has the gift of turning the complex into the conversational without sanding off the edges. Often he sounds like the world’s most intelligent stand-up comic… It is impossible in this space to exhibit the full Quinian magic, the magnificent command of reasoning, pace, rhetoric, and humor—how in two pages he considers the traditional arguments justifying altruism as self-interest and finds them wanting.”—Raymond Sokolov, The Wall Street Journal

“Quine is not only a great philosopher, but also a master of the English language and a genuine polymath… Anyone who wants to encounter a great philosophical mind in a less technical mood, and to get some feeling for Quine as a peerless companion, raconteur, and amused commentator on the passing show…cannot do better than to read this book.”—Hilary Putnam, London Review of Books

“Quiddities is the work of an author who has faith in his own idiosyncratic enthusiasms. Ranging from lucid expositions of philosophical topics that are central to the fields that have intrigued him throughout his career—particularly logic and the philosophy of mathematics…Quiddities will serve as a superb introduction to central issues in contemporary thinking about logic, mathematics, language and science, an introduction that may lead [one] on to appreciation of Quine’s half century of seminal writings. Aficionados will enjoy the witty reformulations of familiar themes and find a bonus in learning about the quintessential quirkiness of natural language.”—Philip Kitcher, Nature

“[Quiddities] is infused with a deadpan humor that can lighten up even the most austere subjects… At almost every turn there are cheerful ripples of wordplay… These pieces are distinguished by good sense and, at many points, sardonic wit.”—John Gross, The New York Times

“Quiddities, according to Western, are the essential qualities of things: or, trifling distinctions, quibbles. Quiddities also is the playful title of a book of essays by W. V. Quine, the eminent analytical philosopher and emeritus professor at Harvard… But now, in this 80th year, he has produced a small entertainment—he calls it ‘frivolous’—that represents a departure from his customary highly specialized books… Quine writes with grace, wit, and precision, and for those who enjoy word play and mind stretching, much of [the book] is intellectual fun. [It] is organized alphabetically from Alphabet to Zero, and contains essays, besides the previously mentioned two, on such other diverse subjects as freedom, gambling, and truth.”—Charles E. Claffey, The Boston Globe

“This is Quine distilled. There is the marvelously elegant style, the effortless wit, the philosophical authority, and the gleeful display of a quirky and exact learning… Quine expresses himself through smart obiter dicta on philosophical topics seldom addressed in his more austere texts. This could be a cult book for a very sophisticated audience, the kind that reads Fowler for pleasure and Dr. Johnson’s dictionary for brilliance.”—Arthur C. Danto