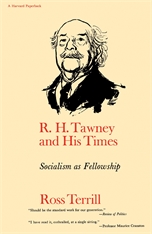 R. H. Tawney and His Times

Economic historian, democratic socialist, educator, and British labor party activist, R. H. Tawney touched many worlds. His life, too, spanned great distance and change. When he was born in Calcutta in 1880, Gladstone, Tennyson, and Queen Victoria were flourishing and the British Empire was approaching its height. By the time of his death in 1962, the Empire had shrunk to a few tourist islands, and socialism, once so shocking, was now commonplace.

Ross Terrill, in this absorbing first study of Tawney’s thought, view his subject within three related contexts. The first is Tawney, the man. Terrill makes skillful use of unpublished material—the early diary, speech and lecture notes, letters, interviews with friends and associates—to tell the story of Tawney’s life in relation to his times. Second is social democracy. Tawney was one of its most influential philosophers and prophets, and this book argues for the continuing validity of his socialism as a path between capitalism and communism. Third is British politics. From Edwardian liberal “consensus” to mid-century collectivist “consensus,” Tawney’s long career, often at odds with prevailing orthodoxies, offers a window on British political culture.

Four key ideas are found in Tawney’s political thought: equality and the dispersion of power—the “shape of socialism”; function and citizenship—the “life of socialism.” These ideas, and indeed the life of the man himself, Terrill believes, are summed up in socialism as fellowship. “As long as men are men,” Tawney said, “a poor society cannot be too poor to find a right order of life, nor a rich society too rich to have need to seek it.”

This book is a blend of biography, history, and the study of political ideas. It provides a striking portrait of a remarkable man and a panorama of changing ideas and situations in the society where he tried to realize his socialist vision. It offers many glimpses of Tawney’s associates, among them Beveridge, the Webbs, Laski, A. P. Wadsworth, Temple, Margaret Cole, and Leonard Woolf; and surprising snippets, like the fact that Tawney used the phrase “private affluence and public squalor” in 1919.