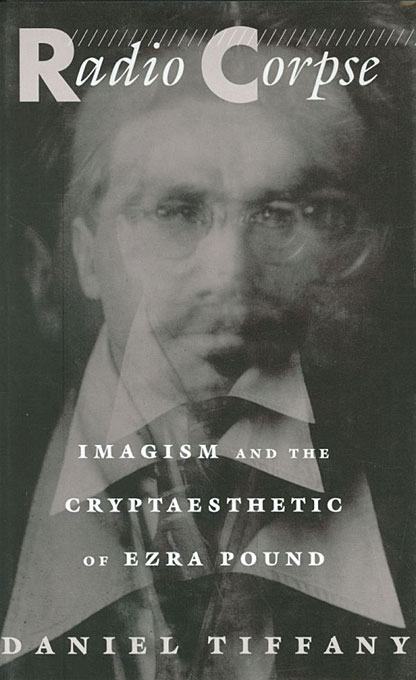 Imagism and the Cryptaesthetic of Ezra Pound

“Daniel Tiffany’s book attempts to bypass the sterile polemic which too often dogs Pound studies by providing a revisionist reading of Pound’s literary strategies, centred upon his problematic ‘Doctrine of the Image’. Tiffany abandons traditional Poundian tools of exegesis; instead, he brings a constellation of the latest literary theorists to illuminate the poetry, using Blanchot’s theories of language and visuality and Marx’s concept of the fetish to develop a picture of Pound as a poet obsessed with attenuation and loss. Pound’s deepest obsession, Tiffany argues, lay in a Medusa-like vision of writing as a self-defeating and ultimately self-referential project, in the perception that writing destroys that which it yearns to preserve, continually reducing the object of its attentions to ‘an exquisite corpse’. This is a startlingly original treatment of Pound’s work. It also has the merit of straddling the gap between politics and literature, history and myth.”—Zöe Carroll, Oxford Quarterly Review

“[B]ecause of the effective interweaving of theoretical mini-essays with the close readings themselves, Radio Corpse is throughout…a thought-provoking and important study… Such features of Radio Corpse make the book a valuable study within a recognizable idiom of theory-led close reading of an individual author; and the limitations of the book are equally…limitations of that genre.”—Alan Durant, New Formations

“Combining recent critical theories of discourse with modern conceptions of visuality, Tiffany…offers a revision of Pound’s ‘Doctrine of the Image’ that opens new territory in the understanding of poetic modernism.”—Choice

“I am extremely impressed by Tiffany’s revisionist reading of Pound and the Image, a reading which moves Pound criticism into some of the most interesting regions of current literary theory. Bringing as he does a new configuration of hermeneutic contexts to his analysis of Pound, Tiffany manages to produce a remarkably iconoclastic reading of the ‘cryptic’ role of the Image in Pound’s career. Indeed, I think that Tiffany’s overall argument…will significantly change the way Pound is going to be read from here on in. He has, in short, given us a Pound for our own fin-de-siècle—a spectral modernist whose deepest and most unspeakable pleasures derive from the crypt, a poet whose ecstatic immediacies are inevitably haunted by the ghostly dictations of the dead.”—Richard Sieburth, New York University

“Thanks to Tiffany’s alert and sophisticated study, the modernist poetics of the images appears in all its cryptic dimensions, and can be linked forcefully with Blanchot’s theses articlating language and visuality, for instance. This is a ‘gRRReat’ book, as Pound would write.”—Jean-Michel Rabaté, University of Pennsylvania

“Probably no word is more widely used and more poorly understood today than the word ‘image.’ Daniel Tiffany’s Radio Corpse awakens this ubiquitous and moribund word to a new half-life by retracing its trajectory in the work of Ezra Pound, from the translations of Cavalcanti to the poet’s infamous radio braodcasts in support of Mussolini’s Italy during the Second World War. Informed by recent theoretical reflection upon the relations that link the ‘radiology of the image’ in Pound’s broadcasts to ‘modernist’ aesthetics, Radio Corpse thus opens Pound’s broadcasts to ‘modernist’ aesthetics. Radio Corpse thus opens new avenues in exploring the interactive of literature, politics, and the media. It constitutes a major work of literary and cultural criticism.”—Samuel Weber, University of California, Los Angeles