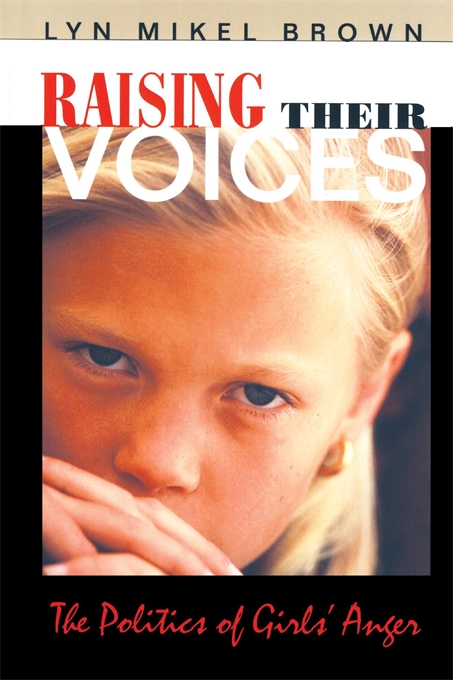 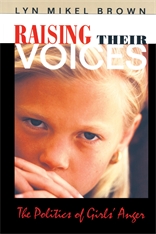 The Politics of Girls’ Anger

“It has been seven years since a much-discussed study by the American Association of University Women identified the phenomenon of girls’ diminishing sense of self-worth as they approach adolescence. Since then, [several] books have further lamented the evaporation of young girls’ feistiness into hesitancy and self-doubt. Lyn Mikel Brown takes a different tack. In Raising Their Voices, she argues that the popular reception of such books has all but ignored an equally significant phenomenon--girls who ’actively resist dominant cultural notions of femininity’...This book is an attempt to provide an alternative prophecy, with the hope that it...will be fulfilled...Brown’s thesis that working-class girls are better equipped to avoid the epidemics of American adolescence is provocative.”—Rebecca Mead, New York Times Book Review

“Brown’s elegant style of writing, along with her sensitivity and perspicacity to the resistant voices of young adolescent girls, creates a compelling book. It is clear from the onset that Brown is gifted in her ability to listen intently to what the young girls have to say. Clearly, Brown’s intention was to enlighten and instigate action among those who are in some way touched by or connected to early adolescent girls, and I believe she achieved this goal.”—Dr. Kimberly Schonert-Reichl, Journal of Moral Education

“Lyn Brown makes it clear that not all girls--not even all white girls--are wilting Ophelias. Brown’s portraits of resistance and outrage in middle-class and working-class white girls point to our failure--as adults, as women, as teachers--to listen to girls and join their resistance.”—Elizabeth Debold, author of Mother Daughter Revolution: From Good Girls to Great Women

“Lyn Mikel Brown shows some of the open and secret pathways that female anger, protest and courage can take. It is the working-class, self-deprecating girls who dare to be openly angry at social pressures on them, while self-promoting, and apparently feminist, middle-class girls take refuge in criticizing other girls. An extraordinary account of how female anger can promote political change or serve the status quo.”—Polly Young-Eisendrath, author of You’re Not What I Expected

“Brown elegantly and subtly captures the fluidity of high school girls’ identity, their self-enabling as well as self-limiting strategies, and their ambivalence about what it means to be female. She doesn’t romanticize these girls but neither does she see them as victims. Raising Their Voices significantly advances our understanding of the ways that gender, class, and race shape girls’ identity. ”—Vicki Smith, University of California, Davis

“In this brilliant and unsettling study, Lyn Mikel Brown describes the revolutionary importance of research on girl’s development: the discovery of girls’ strength and resilience. Her analysis of the experience of white girls reveals the psychological power of race and social class. Encouraging girls to raise their voices, she encourages all of us to listen and take girls seriously.”—Carol Gilligan, Harvard University Graduate School of Education

“Brown’s observations about class differences and emotional expression should prove intriguing for those trying to explore the valleys and peaks of an adolescent mind.”—Publishers Weekly

“Brown spent a year talking to [rural and urban] girls about their experiences and expectations, comparing their different levels of rebellion and self-blame. She has done an admirable job. Both groups come across as feisty, but it is the rural group to whom one’s heart goes out, not so much for their treatment at school but because of their pessimistic yet realistic expectations regarding their adult lives. Highly recommended for public and academic libraries.”—Sharon Firestone, Library Journal

“Adding to the research on the lives of young women, and the socializing experiences that affect their development, Brown seeks to balance the ’Ophelia-like’ discussions that posit low self-esteem and accommodation as inevitable directions for most adolescent girls. Finding that feminist intellectual analysis has not included studies of young women’s healthy anger and assertion of strong feelings in response to pressure to capitulate and conform, focus groups from two schools, one working class, one middle class, allow us to hear strong voices of resistance and refusal as counterweight to loss...[Brown] explores whether, with the right support from adults, young women can be given the freedom to resist acquiescing to pressures to ignore their own needs and beliefs, and create, with their generation, a fuller definition of what it means to become a woman. Scholarly and well documented, Raising Their Voices remains accessible to the parents, teachers and guides of young women, and provides informative alternative reading about female development.”—Mary J. Arnold, Kliatt

“In Raising Their Voices, [Lyn Brown] shows us the ways in which girls adopt some forms of the culture’s notions of idealized femininity but resist others. And she seeks to broaden our understanding of girlhood in the ’90s by explaining how cultural fictions about femininity differentially oppress middle-class and working-class girls...It’s not just that [this book reports] the results of research that makes [it] so much more interesting than the girl-victim books front and center in bookstores today; it’s the care [Brown takes] to use working-class girls as subjects, to understand them, to get under their skin and see the world from their perspective. This stance precludes the stereotypical victim perspective, if only because of the feisty, hard-nosed talk and relationships of these girls...Brown’s writing is beautiful as she lovingly recounts the girls’ interactions with each other and with the leaders of the discussion groups.”—Sharon Lamb, Readings