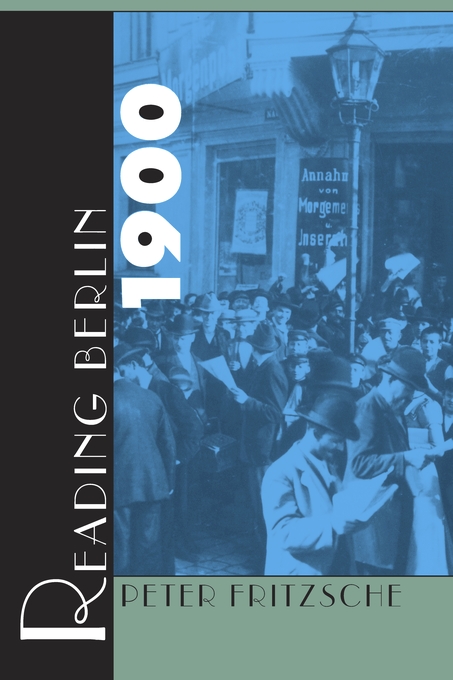 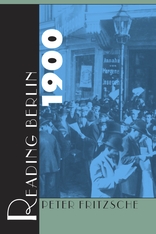 “Fritzsche…does a nice job of reconstructing the city of words that Ullstein and other publishers reared in the newspaper district on the Kochstrasse.”—Anthony Grafton, The New York Review of Books

“Peter Fritzsche’s book engages in marvelous explorations of interactions between turn-of-the-century Berlin, the deluge of contemporary texts about it, and the metropolitan personality that grew in its frenzied environment… Not only an acute observer of urban texts, he draws extensively on current theory about spectatorship, cultural history, and urban studies, demonstrating, as with his earlier books, an admirable ability to think widely about an emergent mass society… This book, and the word-city it explores, will produce a plurality of readings that disorganize and reorganize urban phenomena and their relation to German history. Its major strengths lie in the profusion of Fritzsche’s ideas about the German metropolis and in the exhilarating instruction he gives to historians about learning better to use their eyes and imaginations.”—Katherine Roper, American Historical Review

“Reading Berlin marks an important step forward in charting responses to the modern city… In inquiring into the actual perceptions of turn-of-the-century Berliners and how they understood themselves and their city, Fritzsche’s sensitive and thoroughgoing exploration of the ‘word city’ of metropolitan newspapers is especially apt.”—John Bingham, Canadian Journal of History

“[Reading Berlin has] an argument that, together with Fritzsche’s quotations from the inherently lively sources with which he deals, makes a fresh and stimulating contribution to our understanding of metropolitan life.”—Andrew Lees, Culture in Modern Germany

“There is no shortage of studies by cultural historians addressing the rapid and unique development of Berlin from a medium-sized Prussian residence to a world-class metropolis during the period between 1871 and the First World War. Among these, Peter Fritzsche’s Reading Berlin ranks as one of the most intriguing and, in my opinion, one of the best. Fritzsche does not write a cultural history of the city—he lets the city write it, and he reads the city as a text. The source for this text is the newspaper page, that is, the popular press—the mass-circulation papers… [and] Peter Fritzsche uses the collage of newspaper impressions to create a valid picture of Wilhelmine Berlin… Reading Berlin is an excellent book. It is very well written, and it reflects an enormous knowledge—not only of historical details but also of the literature and arts of the time. The book’s fourteen illustrations are well chosen and are not the standard fare of ‘Kaisers Deutschland.’ The notes are thorough and should be of help to anyone wanting to engage in further research on the subject or on Berlin around in general. Reading Berlin can be recommended to scholars and to the general public, to historians as well as Germanists, indeed, to anyone with a serious interest in urban culture and the urban experience.”—Gerhard Weiss, Journal of Modern History

“In Reading Berlin, Peter Fritzsche admirably captures the sense of dizzying change, excitement, despair, titillation, and disgust which accompanied Berlin’s emergence as a self-proclaimed Weltstadt in the years before World War One. His decision to focus his study on the newspaper culture of Wilhelmine Berlin is salutory, for the city’s mass-circulation press gives him a window onto the processes by which the city was perceived, interpreted and represented by its denizens.”—Warren Breckman, Journal of Social History

“Reading Berlin 1900 is concerned with Berlin during the period around the turn of the century when it grew very rapidly from a provincial German capital to a major metropolis. The success of the book is in its material. It is original, certainly; I have never seen anything quite like it, and it opens up an extremely interesting and important part of writing, the big-city feuilleton. The goal of the book—demonstrating the link between urban writing and urban experience—is very attractive.”—Russell A. Berman, Stanford University

“I greatly enjoyed reading this work, which presents the popular boulevard press as a medium that tried to make sense of the novelty and bewildering complexity of a modern metropolis. Fritzsche has drawn upon a variety of sources—a wealth of newspaper articles from Imperial Berlin, social and cultural theory from that time, and more recent scholarship on literary and cultural history—to compose a work that adds greatly to our knowledge. Fritzsche’s research is prodigious and his judgment is always sound. I believe that it will be read with great interest—and pleasure!—by scholars in the fields of German history, German literature and culture, and cultural history and media studies more generally.”—Peter Jelavich, University of Texas at Austin

“Reading Berlin is a vital contribution to discussions of modernity and urbanism. It gives a new dimension to our understanding of how the city was perceived and tamed and how it touched all aspects of life.”—George Mosse, University of Wisconsin–Madison, author of The Culture of Modern Europe

“The use of newspapers as modernist texts is a brilliant idea, brilliantly executed… The evocation of Berlin in the years before the war is a literary tour de force that succeeds in capturing the specific qualities of the city while at the same time placing it in the larger context of the early twentieth-century modernist metropolis.”—Robert Wohl, author of The Generation of 1914