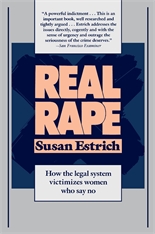 “Real Rape is a vital book for judges, lawyers, law students, legislators, police officers, and those working in rape crisis centers… Estrich’s writing is calm, logical, eloquent, and often scathingly ironic. On its own terms, her book is valuable for its untangling of the various threads of illogic that have formed the centuries-old web that has prevented justice from being served.”—Catherine Foster, The Christian Science Monitor

“A powerful indictment of the sexism, double standards and institutionalized distrust of women that lie behind the legal system’s refusal to treat ‘simple’ rape (the legal term for sexual assault in which the victim knows her assailant and no weapon or overt physical violence is used) as a real crime. This is an important book, well researched and tightly argued… Estrich addresses the issues directly, cogently and with the sense of urgency and outrage the seriousness of the crime deserves.”—K. Kaufmann, The San Francisco Examiner

“Compellingly readable for a wide audience… The book has much to recommend it, such as its discussion of how common law established a precedent for the victim’s having to prove she physically fought back in order to make a successful case against an acquaintance rapist. This is more than the law requires of property owners who wish to protect themselves against trespass or theft.”—Robin Warshaw, Ms.

“Real Rape is a powerful book. It reveals and empowers women’s experiences in law. If it succeeds in creating a drive for the revision of rape law, it may enable women to get out from under the ‘unfair struggle with the forces of perception.’”—Kim Lane Scheppele, University of Chicago Law Review

“No one will ever again be able to address the legal problems of rape without taking Susan Estrich’s landmark work into account. It is a model of how to think about a perplexing legal issue without losing track either of logic or of human experience.”—Laurence Tribe