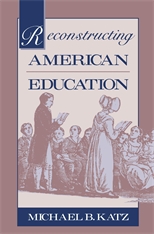 One of the leading historians of education in the United States here develops a powerful interpretation of the uses of history in educational reform and of the relations among democracy, education, and the capitalist state. Michael Katz discusses the reshaping of American education from three perspectives. First is the perspective of history: How did American education take shape? The second is that of reform: What can a historian say about recent criticisms and proposals for improvement? The third is that of historiography: What drives the politics of educational history? Katz shows how the reconstruction of America’s educational past can be used as a framework for thinking about current reform. Contemporary concepts such as public education, institutional structures such as the multiversity, and modern organizational forms such as bureaucracy all originated as solutions to problems of public policy. The petrifaction of these historical products—which are neither inevitable nor immutable—has become, Katz maintains, one of the mighty obstacles to change.

The book’s central questions are as much ethical and political as they are practical. How do we assess the relative importance of efficiency and responsiveness in educational institutions? Whom do we really want institutions to serve? Are we prepared to alter institutions and policies that contradict fundamental political principles? Why have some reform strategies consistently failed? On what models should institutions be based? Should schools and universities be further assimilated to the marketplace and the state? Katz’s iconoclastic treatment of these issues, vividly and clearly written, will be of interest to both specialists and general readers. Like his earlier classic, The Irony of Early School Reform (1968), this book will set a fresh agenda for debate in the field.