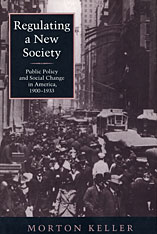 A leading scholar of twentieth-century American history looks again at the beginning of the century, this time giving us a remarkable portrait of the emergence of modern society and its distinctive transformations and social problems. As in Regulating a New Economy, his earlier book on the changing American economy, Morton Keller integrates political, legal, and governmental history, now providing the first comprehensive study of the ideas and interests that shaped early twentieth-century American social policy.

Keller looks at the major social institutions: the family, voluntary associations, religion, and education. He examines important social issues: the rights of the individual, the regulation of public mores (gambling, drugs, prostitution, alcohol abuse), the definition and punishment of crime, and social welfare policy (poverty, public health, conditions of labor). His final area of concern is one that assumed new importance after 1900: social policy directed at major groups, such as immigrants, blacks, Native Americans, and women.

The interpretive theme is fresh and controversial. Keller sees early twentieth-century American government not as an artifact of class, race, and gender conflict but as the playing out of tension between the Progressive thrust to restore social cohesion through the principle of order and organization and two other, mutually antipodal, social interests: the weight of the American past and the growing pluralism of modern America. The interplay among these elements—Progressivism, persistence, pluralism—shaped early twentieth-century social policy. The result was no clear victory for any one of these public attitudes, but rather the emergence and delineation of most of the social issues that have dominated American public life for the rest of the century.