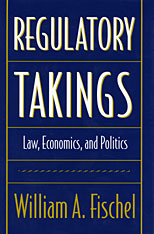 “In William Fischel’s excellent recent book…[he] journeys far and wide over one of the pivotal questions of our time: What are the permissible limitations on government regulation of private property? …All too often today, economists become mired in abstract theory or trapped by detailed econometric demonstrations. Fischel’s readable book avoids both of these unfortunate extremes and concentrates with intelligence and balance on the institutional arrangements at stake in particular cases, with an eye to explaining long-standing practices by sensible, mid-level economic theory.”—Richard A. Epstein, Michigan Law Review

“Regulatory Takings launches a surprisingly energetic shove at property law’s most Sisyphean rock… [Fischel has] written a book packed with interesting ideas and marvelous examples, a book that should inform the modern legislative and jurisprudential debate. What’s more, his book reads as if the research was simply a lot of fun… Fischel’s sheer exuberance in ferreting out data, and his diligence in examining vast numbers of theories, put most land-use scholars to shame… Readers with the slightest interest in takings issues should read Fischel’s work for themselves.”—Carol M. Rose, Yale Law Journal

“This book harks back to an era when economists such as John R. Commons believed that economics, politics, and law were part of the same subject, when systematic inquiries into the complexities of social and economic institutions were an important part of the economics profession. The book has the further great advantage that it is written in a clear and occasionally elegant prose style… [T]he great strengths of the book are the high quality of writing, the many fascinating case studies and other details, and the comprehensive coverage of the literature… [I]t should be the starting point for any economist inquiring into the subject [of takings].”—Robert H. Nelson, Journal of Economic Literature

“In this rich volume, Fischel critically assesses the central debates on the regulatory infringement of property rights, the adjudication of disputes surrounding regulatory takings, and the weighing of key values that should be addressed in the process… Fischel takes the reader through a fascinating set of arguments and debates… Regulatory Takings is a fine contribution to the literature. It is logically arranged, coherently argued, and written with flair and humor… Fischel’s book [is] likely to assume a place next to other classics in the field and shape future discussions of the takings issue. This volume should be widely read by scholars of public law, law and economics, regulation, and public policy.”—Marc Allen Eisner, Law and Politics Book Review

“Fischel uses local land-use regulation as a vehicle for exploring the relationship of law, economics, and the political process. This he does skillfully and with erudition. His critiques of the writings of leaders in the field of law and economics—Ronald Coase, Robert Ellickson, Frank Michelman, Richard Epstein, and others—provides a useful and balanced presentation of contrasting perspectives from the literature of law and economics. His review of many takings cases is equally stimulating.”—Rutherford H. Platt, Issues in Science and Technology

“There is much more of note in Fischel’s book than the elaboration of [his] intriguing proposal. For example, no student of land use should miss his detailed discussion of the facts in Pennsylvania Coal v. Mahon. There is much more to that case than we have ever thought before. Additionally, Fischel develops an intriguing theory of cycles in the judicial and legislative willingness to compensate owners when their property is taken… Finally, the book contains an extensive, nontechnical, and superb summary of the law-and-economics literature on various aspects of regulatory takings.”—Thomas S. Ulen, Land Economics

“Fischel’s approach…considers not only the legal, economic and political considerations alluded to in his subtitle, but also case-specific and historical assessments of the development of Takings doctrine… Regulatory Takings is a pleasure to read. It is lucid and engagingly written, and achieves accessibility for those who are not experts on Takings without sacrificing sophistication.”—David A. Skeel, Public Choice

“The situation is complicated, but Fischel, who has spent much of his life teaching and acting in this area, is as well qualified to write about it as anyone can be. Unlike Epstein who has strong theoretical views as to what should be done, Fischel’s position is basically practical. He feels that landowners whose land is subject to some kind of change that may injure them have two sources of protection, one of which is the use of pressure on democratic elected groups, and the other is the courts. Much of this book is devoted to detailed discussions of where the remedy should lie in specific instances… Anyone interested in this field can find no better guide to what has been done, and what can be done.”—Gordon Tullock, Southern Economic Journalist