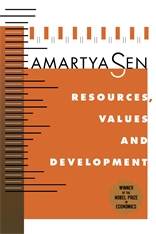 “[Sen] has a mind like a searchlight, illuminating his material with an intense lucidity; he has a gift for looking at assumptions his colleagues have long taken for granted, and finding them defective… From the body of work represented by this book, [Sen] emerges as one of the profession’s most remarkable protagonists of the forces of reason. Massively researched, scrupulously referenced…a share of these papers would be a satisfactory lifetime’s achievement for many academics: but they are only a fraction of his durable and wide-ranging accomplishments. And they are written with a combination of humanity, rigor, elegance and force that puts him in the most rare and distinguished company.”—Robert Cassen, London Review of Books

“Amartya Sen occupies a unique position among modern economists. He is an outstanding economic theorist, a world authority on social choice and welfare economics. He is a leading figure in development economics, carrying out path-breaking work on appraising the effectiveness of investment in poor countries and, more recently, on famine. At the same time, he takes a broad view of the subject and has done much to widen the perspective of economists.”—A. B. Atkinson, The New York Review of Books

“Amartya Sen, [the 1998] Nobel Prize winner in Economics, has helped give voice to the world’s poor. And that is no small matter, for the very lives of the world’s poor may depend on having their voices heard. In a lifetime of careful scholarship, Sen has repeatedly returned to a basic theme: even impoverished societies can improve the well-being of their least advantaged members. Societies that attend to the poorest of the poor can save their lives, promote their longevity and increase their opportunities through education and productive work. Societies that neglect the poor, on the other hand, may inadvertently allow millions to die of famine—even in the middle of an economic boom, as occurred during the great famine in Bengal, India, in 1943, the subject of Sen’s most famous case study… Sen [delivers a] powerful message: annual income growth is not enough to achieve development. Societies must pay attention to social goals as well, always leaning toward their most vulnerable citizens, and overcoming deep-rooted biases to invest in the health and well-being of girls as well as boys. In a world in which 1.5 billion people subsist on less than $1 a day, this Nobel Prize can be not just a celebration of a wonderful scholar but also a clarion call to attend to the urgent needs and hopes of the world’s poor.”—Jeffrey Sachs, Time