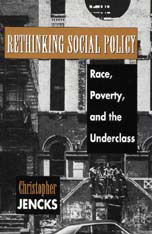 Race, Poverty, and the Underclass

“The essays [in this book] deal with such widely contested matters as affirmative action; the argument—associated with Charles Murray’s influential book ‘Losing Ground’—that welfare creates the conditions it purports to eliminate; the nature-versus-nurture controversy with reference to crime; the analysis by the University of Chicago sociologist William Julius Wilson of the urban ghetto; trends in the size of the American underclass; and the need for reform on welfare policies toward single mothers… Mr. Jencks’s capacity to zero in on the relevant statistics, his down-to-earth sense of reality, his way of pinpointing areas of ignorance in which ideology often outpaces limited data, and his unpretentious moral judgments, which are utterly lacking in self-righteousness, are exemplary. Christopher Jencks, I am fully persuaded, is a national resource.”—Dennis H. Wrong, The New York Times Book Review

“Christopher Jencks takes on some of the most difficult issues facing contemporary liberalism: affirmative action, the underclass, the heritability of intelligence and criminal inclination, and the necessity for lying by welfare recipients whose payments are inadequate for survival. Jencks is an intellectually courageous person, determined to confront and deal with the forces that have undermined his deeply felt commitment to egalitarianism… Rethinking Social Policy is an extraordinary achievement. Jencks…not only takes on issues that are explosively dangerous for a liberal academic but, in the main, does so without ideological bias, and with consistent intellectual clarity.”—Thomas Byrne Edsall, The Atlantic

“[Jencks’s] is the most perceptive discussion I have seen of the connections between race and class, the drive for success and fear of failure, and the way that recurrent crises defy durable solutions.”—Andrew Hacker, The New York Review of Books

“Few social scientists are as thoughtful, perceptive, and wide-ranging as Christopher Jencks… This is an excellent book.”—Sheldon Danziger, Contemporary Sociology