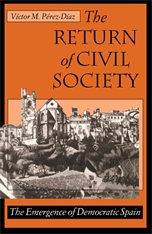 The Return of Civil Society

The Emergence of Democratic Spain

Víctor Pérez-Díaz examines the return of civil society in Spain. He covers the transition of Spain from a preindustrial economy, an authoritarian government, and a Roman Catholic-dominated culture to a modern state based on the interaction of economic and class interests, on a market society, on voluntary associations such as trade unions and political parties, and on a culture of moral autonomy and rationality.