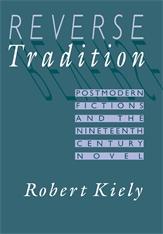 Reverse Tradition invites the reader of postmodern fiction to travel back to the nineteenth-century novel without pretending to let go of contemporary anxieties and expectations. What happens to the reader of Beckett when he or she returns to Melville? Or to the enthusiast of Toni Morrison who rereads Charlotte Bronte? While Robert Kiely does not claim that all fictions begin to look alike, he finds unexpected and illuminating pleasures in examining a variety of ways in which new texts reflect on old.

In this engaging book, Kiely not only juxtaposes familiar authors in unfamiliar ways; he proposes a countertradition of intertextuality and a way to release the genie of postmodernism from the bottleneck of the late twentieth century. Placing the reader’s response at the crux, he offers arresting new readings by pairing, among others, Jorge Luis Borges with Mark Twain, and Maxine Hong Kingston with George Eliot. In the process, he tests and challenges common assumptions about transparency in nineteenth-century realism and a historical opacity in early and late postmodernism.