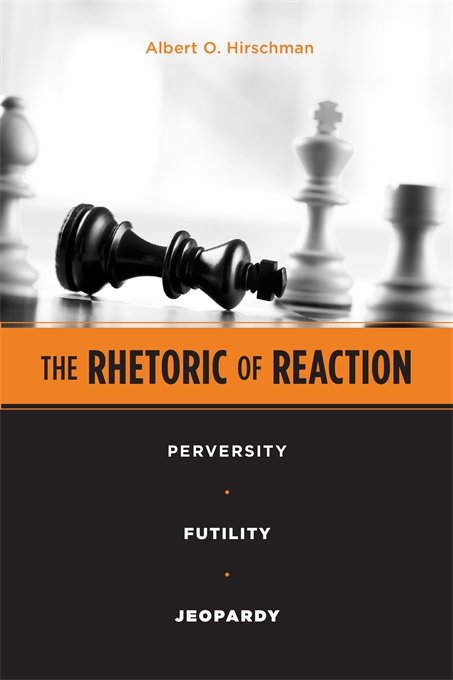 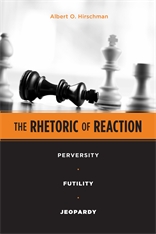 The Rhetoric of Reaction

With engaging wit and subtle irony, Albert Hirschman maps the diffuse and treacherous world of reactionary rhetoric in which conservative public figures, thinkers, and polemicists have been arguing against progressive agendas and reforms for the past two hundred years.

Hirschman draws his examples from three successive waves of reactive thought that arose in response to the liberal ideas of the French Revolution and the Declaration of the Rights of Man, to democratization and the drive toward universal suffrage in the nineteenth century, and to the welfare state in our own century. In each case he identifies three principal arguments invariably used: (1) the perversity thesis, whereby any action to improve some feature of the political, social, or economic order is alleged to result in the exact opposite of what was intended; (2) the futility thesis, which predicts that attempts at social transformation will produce no effects whatever—will simply be incapable of making a dent in the status quo; (3) the jeopardy thesis, holding that the cost of the proposed reform is unacceptable because it will endanger previous hard-won accomplishments. He illustrates these propositions by citing writers across the centuries from Alexis de Tocqueville to George Stigler, Herbert Spencer to Jay Forrester, Edmund Burke to Charles Murray. Finally, in a lightning turnabout, he shows that progressives are frequently apt to employ closely related rhetorical postures, which are as biased as their reactionary counterparts. For those who aspire to the genuine dialogue that characterizes a truly democratic society, Hirschman points out that both types of rhetoric function, in effect, as contraptions designed to make debate impossible. In the process, his book makes an original contribution to democratic thought.

The Rhetoric of Reaction is a delightful handbook for all discussions of public affairs, the welfare state, and the history of social, economic, and political thought, whether conducted by ordinary citizens or academics.