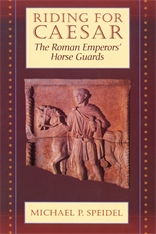 Caesar praised them in his Commentaries. Trajan had them carved on his Column. Hadrian wrote poems about them. Well might these rulers have immortalized the horse guard, whose fortunes so closely kept pace with their own. Riding for Caesar follows these horsemen from their rally to rescue Caesar at Noviodunum in 52 B.C. to their last stand alongside Maxentius at the Milvian Bridge. It offers a colorful picture of these horsemen in all their changing guises and duties—as the emperor’s bodyguard or his parade troops, as a training school and officer’s academy for the Roman army, or as a shock force in the endless wars of the second and third centuries. Written by one of the world’s leading authorities on the Roman army, this history reveals the remarkable part the horse guard played in the fate of the Roman empire.