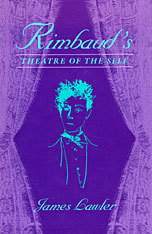 Rimbaud’s Theatre of the Self

In a new interpretation of a poet who has swayed the course of modern poetry—in France and elsewhere—James Lawler focuses on what he demonstrates is the crux of Rimbaud’s imagination: the masks and adopted personas with which he regularly tested his identity and his art.

A drama emerges in Lawler’s urbane and resourceful reading. The thinking, feeling, acting Drunken Boat is an early theatrical projection of the poet’s self; the Inventor, the Memorialist, and the Ingénu assume distinct roles in his later verse. It is, however, in Illuminations and Une Saison en enfer that Rimbaud enacts most powerfully his grandiose dreams. Here the poet becomes Self Creator, Self-Critic, Self-Ironist; he takes the parts of Floodmaker, Oriental Storyteller, Dreamer, Lover; and he recounts his descent into Hell in the guise of a Confessor.

In delineating and exploring the poet’s “theatre of the self” Lawler shows us the tragic lucidity and the dramatic coherence of Rimbaud’s work.