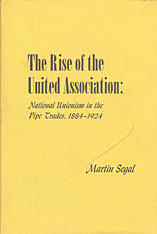 The Rise of the United Association

The study covers 40 crucial years in the history of national unionism of the pipe trades. In the beginning of the period (in the early 1880s) local unions of plumbers, gas fitters, and steam fitters were making first attempts to form a national organization of their crafts; forty years later, the United Association (UA) was unchallenged in its position as the national union of the pipe trades, and constituted one of the strongest organizations in contemporary building trades and in the AFL.

The Rise of the United Association concerns itself primarily with the description and analysis of the development and policies of the national union rather than with the history of local organizations of plumbers and steam fitters. In particular, the study deals with the factors that led to the rise of the first national organization of the pipe trades and then to the founding of the UA; with the complex process of internal reform that transformed the UA—originally a loose federation of locals—into a modern national union; and with the policies and tactics that eventually brought within the fold of the national organization all the pipe trades employed in building and other industries—plumbers, steam fitters, gas fitters, sprinkler fitters, and others.

During the course of the forty years of unionism described in this volume the leaders and members of the national organizations of the pipe trades were confronted with many crucial and difficult issues—the relation of their organization to the Knights of Labor, the development of a viable system of union government and finances, the regulation of apprenticeship in plumbing and steam fitting, the problem of establishing jurisdictional lines among the members of a multi-craft union. The description and analysis of union policies toward these and other issues provide major insights into the process of growth of an important labor organization and, indeed, into the development of national unionism in America.