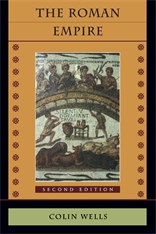 This sweeping history of the Roman Empire from 44 BC to AD 235 has three purposes: to describe what was happening in the central administration and in the entourage of the emperor; to indicate how life went on in Italy and the provinces, in the towns, in the countryside, and in the army camps; and to show how these two different worlds impinged on each other. Colin Wells’s vivid account is now available in an up-to-date second edition.