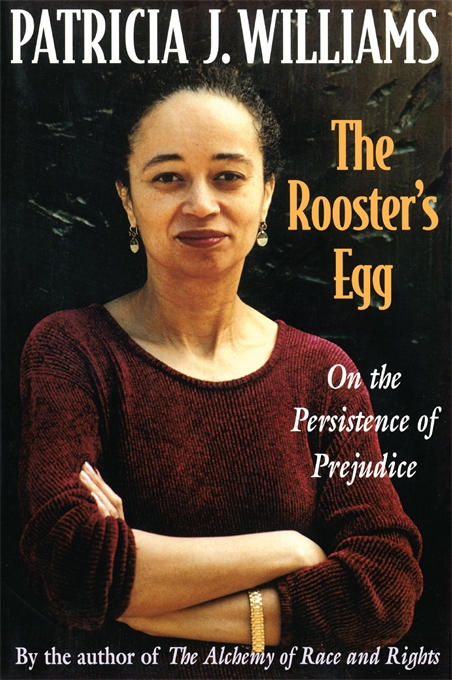 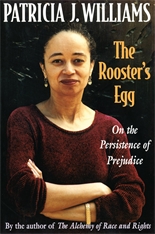 “Written in a personal and anecdotal style from the author’s perspective as a professor, a single black mother, and (much less important) a lawyer… Many [of Williams’s essays] are inspired by a popular event or personality, which becomes the springboard for her hyper-intelligent musings… She emerges as a thoughtful social critic from the left… Her arguments are anything but doctrinaire.”—Saul B. Shapiro, The New York Times Book Review

“[Williams’s] overall contribution to contemporary political debate is invaluable. Her insights are complex and compelling. Few today see so clearly, and write so engagingly, about the prejudice that has settled so insidiously into our lives.”—Jane Goldman and Miranda Joseph, In These Times

“In The Rooster’s Egg: On the Persistence of Prejudice Patricia Williams brings her searing and formidable intellect to a vast array of the images, texts and practices of American popular culture, analysing them along lines of race, gender, class, culture, and sexual orientation.”—Annalise Acorn, Canadian Philosophical Reviews

“The Rooster’s Egg is masterfully crafted and complex. Williams’s outrage and despair leavened by her insight and wit make her perhaps uniquely able to get us past that Catch-22 that leads to either silence or hostility to a place where a conversation about prejudice can occur.”—Patricia Ewick, Contemporary Sociology

“Williams’s writing exceeds the usual boundaries of legal, and even of political, concerns. Her focus remains the translation of beliefs and values, including her own, into various legal, social, pedagogical and political practices… What emerge in these essays are the consequences of received and esteemed social knowledges, for the ‘market’ in adoptive children, for the survival of black families, for justice, for communal ties and for the aspirations of racially marked people… [This book] will be enormously useful to those who wish to challenge the racial, ethnic, gender and national solipsism of much of what passes for foundational ‘knowledge.’”—Cynthia Burack, Feminism & Psychology

“Williams…writes with passion from a feminist/neo-Marxist point of view, demonstrating how the tolerance of intolerance helps to keep enshrined segregation and prejudice in a society which is theoretically integrated.”—Gerald De Groot, The Jewish Chronicle

“The latest book by Patricia Williams has two striking features. The first is its breadth. In the course of thirteen short chapters, Williams takes a brisk tour of contemporary American politics and culture… Beyond its electicism, William’s book is also striking because of its sheer readability. Unlike many law professors who have abandoned academic convention for the sake of presenting narratives, Williams writes with engaging style. She knows how to turn a phrase and how to tell a good story—two talents which permit her to produce enviably fluid prose… Her insights into the varied notions of identity, difference, and value embedded within a range of contemporary debates are truly first rate.”—Keith J. Bybee, Law and Politics Book Review

“[The Rooster’s Egg] serves as a reminder that the problem of race is a constant yet to be addressed by the powers that be… The analysis comes from a female voice with enough clarity, stylings, and strength to make it a fresh and forceful analysis… This is a commendable contribution by a strong and commanding African-American female voice.”—Oliver A. Smith, New York Law Journal

“Patricia Williams’s The Rooster’s Egg…extols the utility of a heterogeneous approach and the radical possibilities of narrative—or, indeed ‘narrative jurisprudence’. Although not highly theoretical, Williams (once again) draws the discourses of law, race, sex and class into a sustained critique of U.S. identity politics. In the midst of, and perhaps in defiance of, criticism of autobiographical legal scholarship…Williams seamlessly incorporates personal narrative into her objective analysis, and makes striking connections between race and the often neglected discourse of class.”—The Year’s Work in English Studies [UK]

“In her second book, Professor Williams turns a focused look at what forces in American society result in the ‘persistence of prejudice.’ This baker’s dozen of essays covers a wide range of topics, including talk show ‘town halls,’ single mothers, talk radio, Lani Guinier, welfare, Clarence ‘X’ Thomas, affirmative action, and adoption. With disarming wit, Williams skillfully and pointedly uses stories, anecdotes, and analysis to examine these and other issues… The Alchemy of Race and Rights and The Rooster’s Egg will frustrate, disquiet and aggravate some readers by relentlessly delving into the changing and often hidden facets of racism or sexism. But this is her intent.”—Lea B. Vaughn, University of Washington School of Law