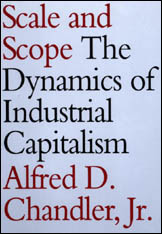 The Dynamics of Industrial Capitalism

“Serious students of the worldwide industrialization that occurred in the century between the 1870s and the 1970s are indebted to Mr. Chandler…for a lifetime of determined effort to find order and predictable processes in industrial history… Chandler started out years ago to make sense out of the transformation of capitalist enterprise caused by the growth of giant industrial companies… He has succeeded with a power and authority that will not soon be matched.”—Jonathan Hughes, The New York Times Book Review

“The book is important. It traces the evolution of the economic environment in which we breathe, and which we need to interpret without the blinders of doctrine or dogma… It is an exhaustive, nation-by-nation, industry-by-industry, company-by-company survey… Chandler is what social science is all about.”—Bernard A. Weisberger, The Washington Post Book World

“In the history of business, B.C. stands for Before Chandler. Over the past several decades, Alfred D. Chandler Jr. of Harvard Business School has brought unprecedented rigor and sophistication to the study of the corporation. In so doing, he has profoundly shaped our understanding of that institution’s role in modern capitalism… [Chandler’s] latest work, Scale and Scope…is his most ambitious yet. Chandler compares and contrasts the growth of the 200 largest companies in each of three industrial powerhouses—the U.S., Britain, and Germany—from the 1880s through the 1940s, searching for the common characteristics of successful corporations… The book speaks to all the major debates swirling around Corporate America—including those over shareholder value, mergers and acquisitions, and global competitiveness.”—Christopher Farrell, Business Week

“A major monument to our increasingly successful quest to understand and interpret the modern industrial world.”—Sidney Pollard, The Times Higher Education Supplement

“Chandler has written an admirable book, analytically tight, and full of fascinating detail. The more he explains, the more, perhaps, there is left to explain. But all future work on the process of successful industrial development must necessarily have reference to his outstanding research and writing.”—Aubrey Silberston, The Times Literary Supplement