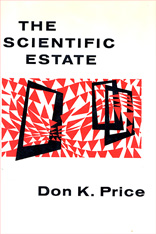 The faith in science as an ally of political and economic progress, which Franklin and Jefferson made so firm a part of the American tradition, has been undermined by the very success of the scientific revolution. Has science become so powerful that it cannot be controlled by democratic processes? Is the scientific community acquiring a privileged role in government something like that of the ecclesiastical estate in the medieval world?

Writing from first-hand experience in government administration and his service on three presidential advisory panels, as well as from extensive research, Don K. Price describes how science and technology have weakened the independence of private corporations and broken down some of the checks and balances on which we have relied for the protection of freedom. In this connection he recounts the recent attempts to set up a national program of oceanographic research, showing that the more advanced the scientific and technological programs are, the more difficult it is to contain them within the normal departmental structure and the more likely they are to bypass the regular lines of responsibility. He then faces the question of whether science is leading us toward some new type of centralized power in which its own processes, rather than those of representative democracy, will determine our policies.

He argues, on the contrary, that the more scientific the sciences become, and the more competent to help in the understanding of public issues, the more freedom of choice they provide for responsible politicians. Science can be translated into political decisions only if its knowledge can be mixed with political purpose. This is done through a chain of responsibility that runs from the scientists to the professionals (like engineers and physicians), and on to administrators and politicians.

Within this set of relations, Mr. Price suggests, we are developing a new system of checks and balances. For whether science leads toward tyranny or freedom depends not on a nation’s state of technological progress, but on what it believes. The freedom of science owes less to the nineteenth-century ideas of laissez-faire and parliamentary sovereignty than to the older tradition on which the American revolution based its separation of church and state and its federal system.

Mr. Price examines the ways in which the President and Congress make use of scientific advice. He sees less reason to fear that authority will be unduly centralized in either the legislative or executive branch, under the American system, than that executive agencies and Congressional committees with common interests in technological programs may acquire power and influence without adequate responsibility.