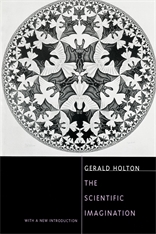 New scientific ideas are subjected to an extensive process of evaluation and validation by the scientific community. Until the early 1980s, this process of validation was thought to be governed by objective criteria, whereas the process by which individual scientists gave birth to new scientific ideas was regarded as inaccessible to rational study. In this book Gerald Holton takes an opposing view, illuminating the ways in which the imagination of the scientist functions early in the formation of a new insight or theory. In certain crucial instances, a scientist adopts an explicit or implicit presupposition, or thema, that guides his work to success or failure and helps determine whether the new idea will draw acclaim or controversy.

Using firsthand accounts gleaned from notebooks, interviews, and correspondence of such twentieth-century scientists as Einstein, Fermi, and Millikan, Holton shows how the idea of the scientific imagination has practical implications for the history and philosophy of science and the larger understanding of the place of science in our culture. The new introduction, “How a Scientific Discovery Is Made: The Case of High-Temperature Superconductivity,” reveals the scientific imagination at work in current science, by disclosing the role of personal motivations that are usually hidden from scientific publications, and the lessons of the case for science policy today.