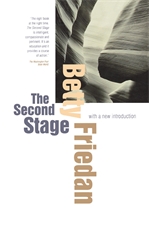 First published in 1981, The Second Stage is eerily prescient and timely, a reminder that much of what is called new thinking in feminism has been eloquently observed and argued before. Warning the women’s movement against dissolving into factionalism, male-bashing, and preoccupation with sexual and identity politics rather than bottom-line political and economic inequalities, Friedan argues that once past the initial phases of describing and working against political and economic injustices, the women’s movement should focus on working with men to remake private and public arrangements that work against full lives with children for women and men both. Friedan’s agenda to preserve families is far more radical than it appears, for she argues that a truly equitable preservation of marriage and family may require a reorganization of many aspects of conventional middle-class life, from the greater use of flex time and job-sharing, to company-sponsored daycare, to new home designs to permit communal housekeeping and cooking arrangements.

Called "utopian" fifteen years ago, when it seemed unbelievable that women had enough power in the workplace to make effective demands, or that men would join them, some of these visions are slowly but steadily coming to pass even now. The problem Friedan identifies is as real now as it was years ago: "how to live the equality we fought for," and continue to fight for, with "the family as new feminist frontier." She writes not only for women’s liberation but for human liberation.