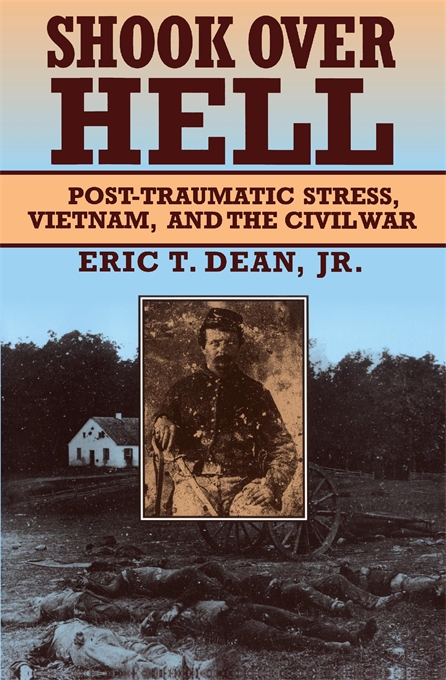 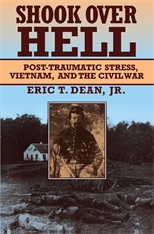 “Shook over Hell is genuinely revisionist on two fronts: it changes our understanding of psychiatric casualties in both the Vietnam War and the Civil War; and it does so not by sleight of hand, redefining terms while leaving the substance unchanged, but by solid research, sound analysis, and lucid…writing. Eric Dean first challenges the myth of the troubled and scorned Vietnam veteran… [He] convincingly demolishes every part of this myth. Citing numerous surveys and studies, he demonstrates that in the 1970s and 1980s Vietnam veterans had higher median incomes than their nonveteran peers and were unemployed at the same rate, had similar rates of drug use and addiction, and, in percentage terms, used more GI Bill benefits to attend college than had veterans of the Second World War… The core of this book is an application of the Post-Traumatic Stress Disorder concept to Civil War soldiers. Part of the myth of the scorned and troubled Vietnam veteran is the implied contrast between his postwar treatment by a hostile or indifferent society and the hero’s welcome given veterans of other wars. Although many studies of Civil War soldiers have appeared in recent years, they have focused mainly on the wartime experiences of these men; their postwar history has been relatively neglected… Dean’s research in Civil War letters and memoirs, postwar newspapers, and pension files was thorough and exhaustive. It has yielded more information about the mental health of Union veterans than historians had previously realized was available… The most original and important feature of this book is Dean’s analysis of 291 case studies of Civil War veterans committed to the Indiana Hospital for the Insane. Most of them exhibited symptoms that would today be diagnosed as PTSD… Of this book it can truly be said, as it is all too often falsely said of other historical studies, that it breaks new ground.”—James M. McPherson, The Atlantic

“A thoughtful and thought-provoking study of Civil War and Vietnam War veterans—and of the mental and emotional problems that unite them… What [Dean] has done—with careful and well-documented research, sensitively analyzed—is to reveal ‘a wide range of psychological and social problems that have not heretofore been associated with the Civil War veteran.’”—Michael Kenney, The Boston Globe

“Overall, Dean uncovered incontrovertible evidence that Post Traumatic Stress Disorder was much more common among Civil War veterans than scholars previously reckoned. Concurrently, he set out to prove that, while very real, PTSD’s incidence among Vietnam vets often has been greatly exaggerated…and to prove what a number of scholars already were suspecting—that PTSD always has existed in war. In doing so, he also helped rehabilitate the image of Vietnam vets.”—Abe Aamidor, The Indianapolis News

“An informative and readable book about the psychological problems of U.S. Civil War and Vietnam soldiers. By comparing two widely separated wars, the author was able to identify important insights into the psychological health of all war veterans. He breaks new ground in our understanding of Civil War veterans in his analysis not only of individual accounts and medical reports, but also of the hospital records of 291 veterans who were committed to the Indiana Hospital for the Insane in Indianapolis from 1861 to 1920… This book clearly demonstrates the value of scholarship and research to better understand the complicated subject of psychological trauma.”—Kenneth C. Hyarns, American Journal of Clinical Hypnosis

“[This is] an important book which deserves careful and unbiased consideration. Well researched and documented, it challenges as fundamentally incorrect a number of popular beliefs about the combat experiences and postwar fates of American soldiers who fought in the Vietnam War… Questioning the uniqueness of both the combat experiences of those who served in Vietnam and the war-induced psychological syndrome suffered by, as conventional wisdom has it, exceptionally large numbers of that war’s veterans, Eric T. Dean, Jr. argues that their problems have been largely overstated and exaggerated by several interest groups involved in ongoing debates on the Vietnam war… [Dean’s] impassioned but lucid discussion in subsequent chapters of what distressed Civil War soldiers had to go through on the battlefield, in field hospitals, in asylums and in civilian life after the war leads to reversing the perspective from which he reexamines the Civil War veteran, so that, in the end, our attention shifts back to the Vietnam veteran again, but now he is seen in a complex and rich context of diverse factors which not only invite a reevaluation of his claim to be ‘a uniquely troubled and scorned individual in American history,’ but, more importantly, challenge many orthodox views about America’s two most controversial wars. Highly recommended.”—Jerzy Kutnik, American Studies in Europe

“In this intriguing and well-written thesis, Dean argues convincingly that combat-related psychological and readjustment problems were common among Civil War combatants and thus challenges the popular view of the Vietnam veteran as unique among American patriots returning home as psychiatric casualties… This thought provoking and informative book would certainly appeal to readers interested in the history of military psychiatry and its relation to the sociopolitical climates of the Vietnam and Civil Wars.”—Mario Tommasi, Civil War News

“This is an extremely important and thoughtful work, one which both impressed and saddened me… Dean begins by reviewing the commonly accepted psychiatric results of the Vietnam war. Popular beliefs blame veterans’ deviant behaviors on the domestic opposition to the war, the quick demobilization that created a temporary unemployment problem, a supposed heroin epidemic, and the mixed reception veterans received when they returned. Suicides, homelessness, criminal activity, family violence, and the like led the mental health profession to discover PTSD (Post Traumatic Stress Disorder), although the notion of combat causing severe neuropsychiatric diseases was hardly new; soldiers had suffered ‘shell shock’ in World War I and ‘combat fatigue’ in World War II… Dean has given us good reason to believe that Vietnam veterans were not unique in their reactions to the stress of war, and upon reflection it is surprising that many people ever thought otherwise… His attacks on the notion of PTSD should not be read as lack of sympathy for the Vietnam veteran, as a casual reader might conclude, but rather as a healthy skepticism of the way in which mental health professionals and their supporters sometimes go about their work.”—Richard E. Beringer (University of North Dakota), H-Net Reviews

“Eric Dean’s case studies of hundreds of veterans of the American Civil War committed to the Indiana Hospital for the Insane succeeds in adding to the understanding of the mental and social problems of many veterans of the Vietnam War, diagnosed as suffering from PTSD. The findings of Dean’s scholarly research enrich our knowledge both of the Civil War and of American military history. Its comparative approach also lends it a welcome practical usefulness.”—George Bull, International Minds

“With the intersection of public events and private experience, a revisionist historical work like Eric Dean’s Shook over Hell is more than timely. With meticulous attention to his primary sources… Dean tests popular wisdom about the figure of the traumatized Vietnam ‘vet.’ Dean’s argument is challenging in a whole set of ways.”—Journal of American Culture

“It is difficult for this reviewer, as a psychiatrist and historian, to overstate his enthusiasm upon learning of Eric Dean’s account of Post-Traumatic Stress Disorder (PTSD) in veteran populations from both the American Civil War and Vietnam War in Shook over Hell. Until this work was published, there certainly existed a common misperception that Vietnam veterans were a unique group of emotional cripples, suffering a markedly exaggerated rate of psychiatric disability in comparison with veterans of ‘popular’ wars in the country’s collective history. This perception makes for tidy journalism, but as Dean shows, it is largely fantasy. In the 1860s, not only did doubts and dissent exist in America, but the experience of the common soldier of that era in facing death and destruction does not appear at all different from that of later generations… In all, this work fills a void in Civil War history and serves as a fascinating bridge to a more recent epoch in American history that at first glance would seem to have little in common with this earlier days, but is perhaps all too similar.”—John S. Carbone, North Carolina Historical Review

“Dean does a very effective job of debunking the notion of the Vietnam War as somehow exceptional in the number and degree of its psychiatric casualties, demonstrates the political motives lying behind that thesis as well as the development of the concept of PTSD, and shows that the Civil War was not exceptional in its supposed lack of combat trauma and postwar neuroses growing out of the combat experience. In all these respects this book will make a major contribution, indeed is likely to have a strong impact on the field of both Vietnam and Civil War studies.”—James M. McPherson, Princeton University

“Shook over Hell ranges widely and includes sharp and brilliant discussions of the image of the American veteran of the Vietnam War, the history of military psychology, and the distinct nature of Civil War military service. Based on painstaking archival research in the records of mental institutions and in the service records of Civil War soldiers, this book will spark controversy and provoke thought and debate. It will inform and considerably revise our understanding of the military psychology of the Civil War, the Vietnam War, and American military history in general.”—Mark E. Neely, Jr., Saint Louis University