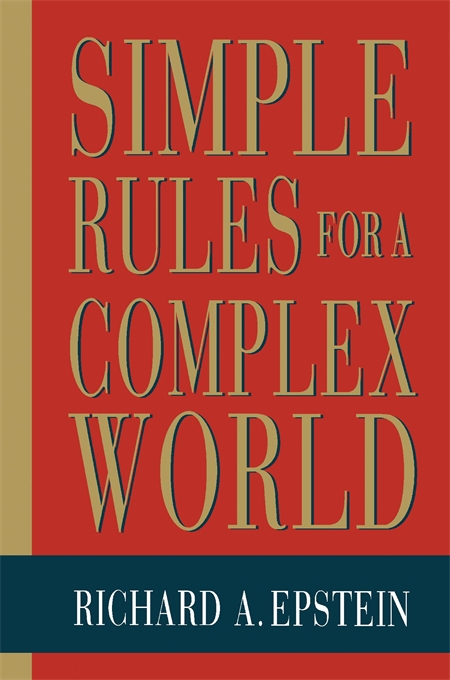 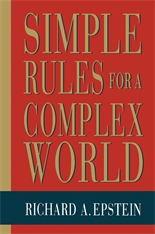 Simple Rules for a Complex World

“Richard A. Epstein, a professor of law at the University of Chicago, has a record of proposing radical and extreme alterations in key areas of law—alterations that perhaps initially could be dismissed as so far from the center of legal thinking as to be of only theoretical interest but then turn out to have much more political life in them than one could have thought possible… Mr. Epstein has to be taken seriously, and not only because of the power of his reasoning and his authoritative command of the common law and political philosophy… The reasoning is strong, the knowledge of specific areas of policies is deep, and behind them stands his basic commitment to a more productive and efficient society… It is bracing to undergo a cold bath in the pure doctrine of the simple rules, and in many areas they will give us some practical guidance.”—Nathan Glazer, The New York Times Book Review

“A book called The Death of Common Sense: How Law is Suffocating America by attorney Philip Howard has captured the attention of Washington’s policy community with its maddening accounts of overzealous regulation and complex litigation. But Mr. Howard’s appeal for enforcing rules with a dose of common sense never sets forth a framework for bringing about legal simplification. That’s why Richard Epstein’s new book…is such a suitable companion to Mr. Howard’s battle cry. Mr. Epstein…believes that the traditional common law is actually more attuned to the modern world… He argues that the more complex the world, the less bureaucrats and lawmakers can know about how everything interacts, and the more perverse and inefficient the law will become… Mr. Epstein’s relentlessly logical arguments tell us why we should return to the tried-and-true rules of the common law. Like manners, the common law has proven useful and long lasting precisely because it is so well-suited to a world of strangers.”—John H. Fund, The Wall Street Journal

“This book is a tour de force of legal history and analysis. It would have been timeless in any event, but the current Congress’ agenda makes it timely as well. Property rights, product and professional liability, a flat tax and environmental protection are now front and center; labor law reform and comparable worth may soon crowd their way onto the agenda as well. Long-range vision and wisdom are too seldom combined with topical analysis, but Simple Rules for a Complex World has this invaluable quality… What Mr. Epstein has accomplished, then, is not the fabrication of a framework but the distillation of one. He has articulated and rationalized basic principles of law in a creative way that shows these principles to have both historical and theoretical primacy. At a time when much legal scholarship is devoted to the deconstruction of the root of our legal order, Mr. Epstein has written a book of reconstruction.”—Roger Clegg, The Washington Times

“A persuasive argument for the American legal system’s return to the common-sense rules of common law, by a distinguished professor at the University of Chicago.”—The Chicago Tribune

“Simple Rules for a Complex World is a clear, consistent, libertarian economic approach to the law that should keep you interested from start to finish.”—Charles W. Chesbro, Trial