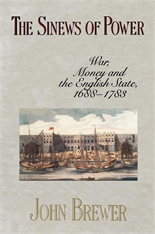 The Sinews of Power

This powerful interpretation of English history provides a completely new framework for understanding how Britain emerged in the eighteenth century as a major international power.

John Brewer’s brilliant analysis makes clear that the drastic increase in Britain’s military involvement (and success) in Europe and the expansion of her commercial and imperial interests would not have happened without a concurrent radical increase in taxation, along with a surge in deficit financing and the growth of a substantial public administration. Warfare and taxes reshaped the English economy, and at the heart of these dramatic changes lay an issue that is still very much with us today: the tension between a nation’s aspirations to be a major power and fear of the domestic consequences of such an ambition—namely, the loss of liberty.