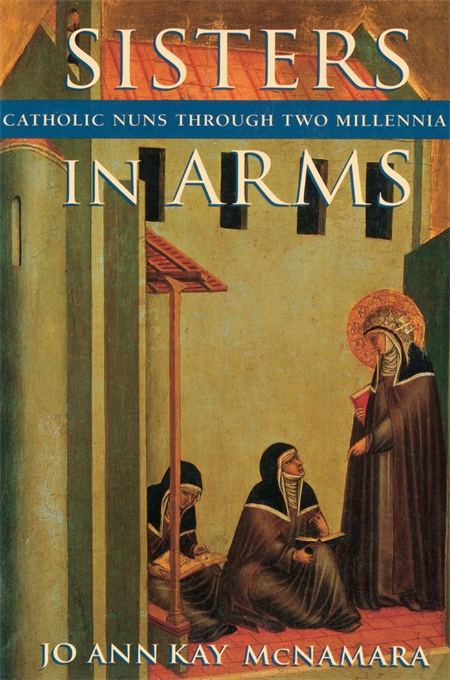 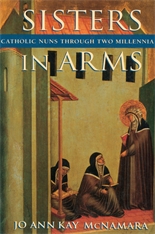 “[A] mammoth study…[and an] engrossing and challenging work… Ms. McNamara gives us a history of women’s rights—and the lack of them—by focusing on women religious since the birth of Christ… [It is] a magnificent achievement… Ms. McNamara has made an inspiring chronicle of [nuns’] struggles.”—Antonia Fraser, The New York Times Book Review

“Sisters in Arms is undoubtedly the definitive work on nuns. The book…covers 2,000 years of Catholic women’s search for holiness in the celibate life. Jo Ann Kay McNamara parades seekers from Mary Magdalen to Sister Mary Theresa Kane, and she does it with a scholar’s eye for detail, a Catholic’s nostalgia, and a raconteur’s penchant for entertainment… Century by century McNamara presents them: women from Galilee (who supported the ‘little band of vagabonds’), deaconesses, hermits, sanctimonials, canonesses, conversae, beguines, anchorites, abbesses, witches and mystics. Stealthily, we enter the sacred and secluded halls of Quedlinberg, Bingen, Amesbury, the Paraclete and glimpse (only just) the occupants. But those glimpses are titillating and make us want to keep on reading.”—Elizabeth McNamer, The Washington Post Book World

“Sisters in Arms…is fascinating to read… [It] presents a powerful story of dedication and struggle.”—Sally Thompson, The Times Literary Supplement

“[An] ambitious and energetic book.”—Fiona McCarthy, The New York Review of Books

“[An] extraordinary book… In her preface, McNamara affectingly declares: ‘Like Voltaire, I have grown up to be a secular humanist, yet, like him, I must concede that all I am I owe to my Catholic education.’ It has served her—and her readers, including this one—very well.”—Jaroslav Pelikan, The New Republic

“[A] sweeping and scholarly work…[that’s] fascinating and carefully researched… Sisters in Arms is likely to be for some time the definitive history of Catholic religious women in the West.”—Mary N. MacDonald, America

“[An] exhausting, fascinating, tragic and admirable history of Catholic women in religious orders over 2000 years… When the institutional church remains hostile to feminism, and secular feminists tend to see religion as unrelieved oppression of women, it is a genuine service to have compiled this record of the iron will, society-building achievements, and fertile influence of these determined, inspired women—women whose faith cracked open a space, however small, for responsibility for the direction of their own minds, bodies, and spirits.”—Alane Salierno Mason, The Baltimore Sun

“The meaning of female monasticism has reflected, in predictable as well as surprising ways, the position of women in the world… [T]his book provides an excellent angle from which to observe that position.”—Katherine A. Powers, The Boston Sunday Globe

“[A] remarkable story—truly of epic proportions… The book is a tour de force… No book in the library has told the whole rich story [of Catholic nuns] as soundly and intelligently as this one does; and for that Jo Ann Kay McNamara deserves our undying gratitude.”—Catholic Book Club

“In a book which is written to be read by interested general readers as much as scholars, McNamara not only brings into view all the best-known nuns from 2000 years of Christian history—from Mary Magdalen and Thecla through Bridget of Kildare and Hilda of Bingen to Thérèse of Lisieux and Mary Theresa Kane—but also gives glimpses of thousands of unnamed nuns… [They] make up a richly described and impressively researched tableau of mystics and bad apples, pragmatists and adventurers, the docile and the daring.”—Susan O’Brien, The Catholic Herald

“Sisters in Arms, which is attracting high praise from reviewers, is a remarkable work, in the judgment of Sister Karen Kennelly, president of Mount St. Mary’s College in California… She calls the book ‘a unique effort to lay out the comprehensive picture of the history of religious life for women’… Dr. [Mary Martin] McLaughlin [a medieval historian formerly of Vassar College] calls the book ‘groundbreaking in certain of its aspects, certainly in its scope,’ and she praises its economic analysis and use of family histories.”—Peter Monaghan, The Chronicle of Higher Education

“McNamara’s work…is a learned and readable history of religious women which begins historically with female discipleship in the New Testament era and ends with some contemporary reflections on female religious orders today… The precise merit of this highly accessible historical study rests in the author’s keen appreciation that the Christian tradition, though organic, is not monodirectional… McNamara raises many historical questions that remain pertinent today… [T]he strong historical narrative and the rich panorama of persons…give shape and power to Sisters in Arms. I know of no other book of such comprehensive scope. It deserves a wide readership for what it tells us about women in the Christian tradition generally and in the ascetic/religious/vowed world in particular.”—Lawrence S. Cunningham, Commonweal

“[McNamara’s] knowledge of nuns is encyclopaedic… The story [told in this book] is…fascinating. Professor McNamara may be a secular humanist but she has the generosity to recognise that Christianity transformed the status of women in the Western world.”—John Keegan, The Daily Telegraph

“McNamara has done us a tremendous service in bringing our foremothers’ struggle for spiritual riches into view.”—Linda Cahill, The Globe and Mail

“Original sources and archives are excavated [here] to find the hidden story of women who, voluntarily and involuntarily, took the veil. Ms McNamara has achieved a balance between impressive academic research (there are over one thousand detailed references) and a book for the general readership that gives Catholic sisterhood a distinct historical identity. The extent and variety of sisterhood revealed by Ms McNamara’s research is staggering.”—Gina Menzies, The Irish Times

“A rich tumble of anecdotes, stories, examples and testimonials, presented in a vigorous and engaging writing style with a certain staccato rhythm, clothes the understructure of serious scholarship. McNamara’s strength is in dealing with the early and high Middle Ages. She explains clearly the logic of various social and particularly economic structures which more often than not determined whether a young woman would enter a convent (willingly or otherwise) and just what the range of options were for the individual and for the community… [The book is] a masterwork of recovered history, finely detailed and assessed with a knowing and worldly-wise eye.”—Susan K. Roll, Louvain Studies

“Jo Ann Kay McNamara’s massive, definitive history of Catholic nuns in the West is accessible and fascinating, thoroughly cohesive and told with the authority of the historian and the charm of the storyteller. While historians will appreciate McNamara’s scholarship…and her brilliant achievement in synthesizing so much history, the lay reader can easily enjoy the work as popular literature… For nuns have always had to fight… They have been reviled as witches, as virgins, as whores. Even their very history was long silenced, not ‘important’ enough to record. The convent has always been a way to seek spiritual fulfillment, but it has never been a perfect refuge. Nuns have always had to adapt to changes in the landscapes of politics, class and culture. They have produced sinners and saints as well as ordinary women doing good works. Most of all, they have endured. And in Sisters in Arms, they prove to be a…compelling [subject].”—Sandra Scofield, Newsday

“McNamara’s impressive volume reads the long history of Christianity against the grain… She has rendered a set of rattling good stories about women over the long haul… The vast territory covered by this book inspires admiration… McNamara is an insightful interpreter of texts whose rhetorical flourish lets us see the heroism at the heart of the female religious vocation. She gathers together in one volume an impressive array of women forgotten or deliberately erased from history…and creates a coherent narrative of struggle forward from the earliest days of Christianity to the present.”—Mary Jo Weaver, The Philadelphia Inquirer

“Sisters in Arms has received great acclaim in the secular press, and makes a splendid contribution to the history of Catholic nuns and sisters. In a single volume [the author] has drawn together the fruits of decades of research and comprehensive documentation, but in a way which makes for compulsive reading rather than boring narrative. Her overarching theme is the way in which male clerics tried to shape and control the lives of ecclesial women religious, much as husbands used their legal rights to control the lives of their wives and children… The treatment of women religious during the upheavals of the European reformations makes poignant reading… [A] splendidly incivisive account of women religious within the Christian tradition.”—Judith Lancaster, The Way [UK]

“Women will be heartened to discover pioneers in their fight for autonomy and enlightened by McNamara’s analysis of their struggles.”—Carole Slade, Women’s Review of Books

“To narrate two millennia of history in a single volume that is both comprehensive and accessible is no easy task, but McNamara succeeds admirably… A readably and compelling account of institutions and structures that have defined and been defined by women in the Roman Catholic Church from its origins.”—Booklist

“McNamara…knows how to make complex issues clear for a general audience. Throughout her ambitious narrative she pays close attention to the scholarly literature. But she does not allow the apparatus of scholarship to banish her own feminist point of view, or to overwhelm the story. What comes across most strongly in Sisters in Arms is the extraordinary tenacity of religious commitment women have made to the Church over the centuries, and the great difficulties they have faced in expressing a female point of view within an institution dominated by men… Readers…will be rewarded with vivid reminders of the many ways that the problem of gender has been dealt with throughout Western history. More than a history of nuns, Sisters in Arms is a survey of how the Roman Catholic tradition has confronted the ever-present question of how to conceptualize the relationship between men and women.”—Kirkus Reviews

“McNamara’s fascinating guide through the lives and work of Catholic nuns over the last two thousand years reveals both the successes and failures of these women who have played such significant roles in the history of the Catholic church.”—Publishers Weekly