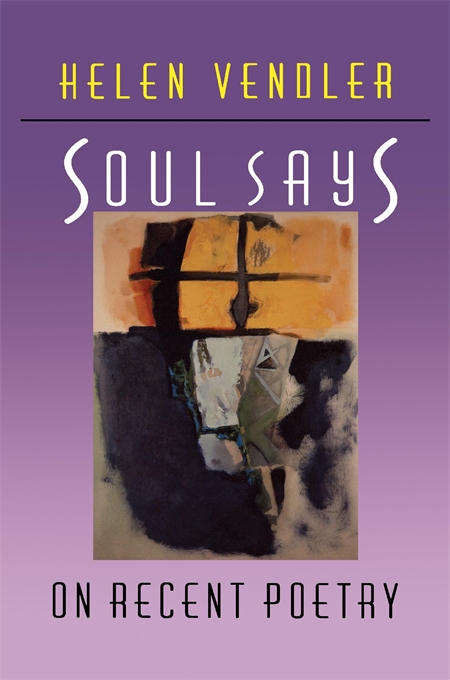 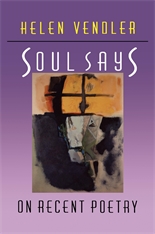 “Helen Vendler is justly admired as the author of critical studies of George Herbert, Keats, W. B. Yeats, and Wallace Stevens. Her current project is a study of Shakespeare’s sonnets. She is also the most influential reviewer of contemporary poetry in English: her reviews of new books of poetry appear frequently and forcefully in The New Yorker, The New York Review of Books, The New Republic, Parnassus, and other journals. Soul Says…is a collection of her recent reviews… [H]er gifts are so immense… The new books have a number of such [acute] analyses, continuously alert to the detail of the poems… One of the pleasures of reading Vendler’s criticism is that of seeing a poet’s achievement lavishly appreciated… The most valuable chapters in the three new books are those in which Vendler leads us through difficult poems… After [she does so], the poem is still to be read, and read again, word by word, line, sequence, image cut into image. We have to get back from the discursive model, which Vendler so clearly describes, to the local movement and texture of the poem. But after Vendler’s commentary we are in a much better position to do so. I cannot think of a better justification for a critic’s work.”—Denis Donoghue, The New York Review of Books

“[In this] engrossing consideration of lyric form, Vendler again demonstrates—if proof were needed—why she is the finest poetry reviewer in this country… The 32 essays include a brilliant summation of A. R. Ammons’ ‘Sumerian Vistas’ and lively discussions of Donald Davie’s ‘Collected Poems,’ the menacing midnights of Charles Simic… Such are Vendler’s felicities—inspiriting enthusiasm for the art and an attendant close reading in which her readers hear the poet’s voice afresh.”—Robert Taylor, The Boston Globe

“Helen Vendler’s credentials precede her by a length and a half… That a non-poet (and an academic to boot) should wield such influence over American poetry is remarkable… She is at her best when discussing individual poems or passages, especially in the cases of a sonnet by Seamus Heaney, when she performs a brilliant analysis of the relationship of rhyme to reason, and in several sections of Ashbery’s ‘Flow Chart’… She believes in a common reader and wants to elucidate the difficulties of contemporary poetry.”—R. S. Gwynn, The Los Angeles Times Book Review

“If there is one commentator on contemporary poetry whose reviews bear gathering and reprinting, it is Helen Vendler… Vendler’s readings help us to hear, and to discern, the sounds of the soul speaking.”—John Boening, World Literature Today

“The English reader wanting to know more about [Rita] Dove and other recent American writers will find Vendler’s enthusiasm infectious and her acceptance of the poetic art in its own terms helpful. As well as the essays on Ginsberg and Dove I found the work on Adrienne Rich, Jorie Graham and Seamus Heaney particularly valuable.”—STAND Magazine

“Vendler’s New Yorker reviews of contemporary poetry, collected here, are revelatory of her critical stance. She does not look for content, she says in her introduction, but for felicity of language. A poem, she argues, rises beyond the occasion that created it. She is interested, then, in poems that define a human voice and emotion… One of our most accessible critics, Vendler is fluent, impassioned, and immensely learned.”—Patricia Monaghan, Booklist

“[Vendler] discusses the lyric poetry of 23 contemporary poets, mostly American, including Allen Ginsberg, Rita Dove, James Merrill, and Dave Smith, giving particular attention to Seamus Heaney and Jorie Graham. In analyzing individual poems, Vendler describes the stylistic choices the poet made and how the completed poem reveals the inner self, or ‘soul,’ of the poet… Anyone interested in contemporary poetry can learn from her insights.”—Library Journal