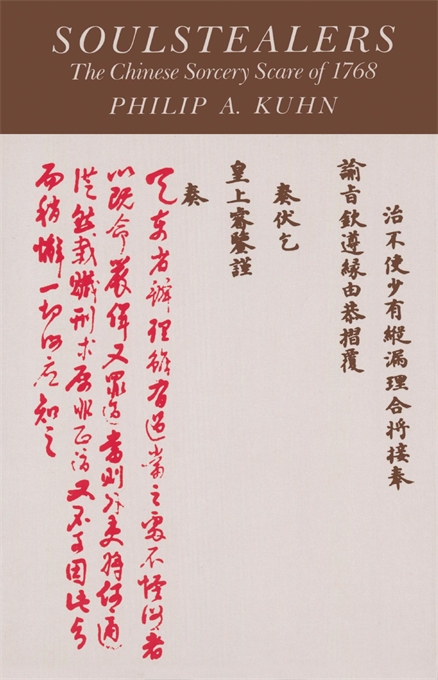 The Chinese Sorcery Scare of 1768

Midway through the reign of the Ch’ien-lung emperor, Hungli, in the most prosperous period of China’s last imperial dynasty, mass hysteria broke out among the common people. It was feared that sorcerers were roaming the land, clipping off the ends of men’s queues (the braids worn by royal decree), and chanting magical incantations over them in order to steal the souls of their owners. In a fascinating chronicle of this epidemic of fear and the official prosecution of soulstealers that ensued, Philip Kuhn provides an intimate glimpse into the world of eighteenth-century China.

Kuhn weaves his exploration of the sorcery cases with a survey of the social and economic history of the era. Drawing on a rich repository of documents found in the imperial archives, he presents in detail the harrowing interrogations of the accused—a ragtag assortment of vagabonds, beggars, and roving clergy—conducted under torture by provincial magistrates. In tracing the panic’s spread from peasant hut to imperial court, Kuhn unmasks the political menace lurking behind the queue-clipping scare as well as the complex of folk beliefs that lay beneath popular fears of sorcery.

Kuhn shows how the campaign against sorcery provides insight into the period’s social structure and ethnic tensions, the relationship between monarch and bureaucrat, and the inner workings of the state. Whatever its intended purposes, the author argues, the campaign offered Hungli a splendid chance to force his provincial chiefs to crack down on local officials, to reinforce his personal supremacy over top bureaucrats, and to restate the norms of official behavior.

This wide-ranging narrative depicts life in imperial China as it was actually lived, often in the participants’ own words. Soulstealers offers a compelling portrait of the Chinese people—from peasant to emperor—and of the human condition.