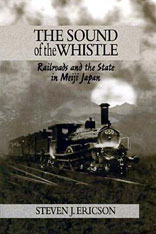 The Sound of the Whistle

Railroads and the State in Meiji Japan

In this thorough and detailed study of the development of the Japanese railroad industry during the Meiji period, Steven Ericson explores the economic role of government and the nature of state-business relations during Japan’s modern transformation. Ericson challenges the tendency of current scholarship to minimize the roles of the Japanese government and commercial banks in Meiji industrialization. By providing a fresh perspective on the “strong state/weak state” debate through a detailed analysis of the 1906–1907 railway nationalization, Ericson’s study sheds new light on the Meiji origins of modern Japanese industrial policy and politics, filling a major gap in the available literature on the Meiji political economy.