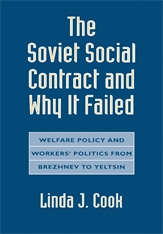 The Soviet Social Contract and Why It Failed

Welfare Policy and Workers’ Politics from Brezhnev to Yeltsin

“One of the great problems about perestroika has been the attitude of the Soviet masses to the ideas of reform. Another problem has been the woefully backward condition of the Soviet economy, which in its collapse under Gorbachev has made the term ‘reform’ almost ironic. Previous writers on perestroika have tackled both problems in terms of generalities and platitudes about the technological backwardness of non-market economies. With Linda Cook’s book, we get a very valuable correction of those views.”—Adam B. Ulam, Harvard University

“In this clear, tightly focused work, Cook lays out critical sources of perestroika’s ultimate failure, in Gorbachev’s fear of revoking the ‘social contract’ that had, however imperfectly, bound the old regime and much of the Soviet population… [A] thorough treatment of radical reform policies and uncertain implementation in the USSR’s twilight.”—Walter D. Connor, Boston University