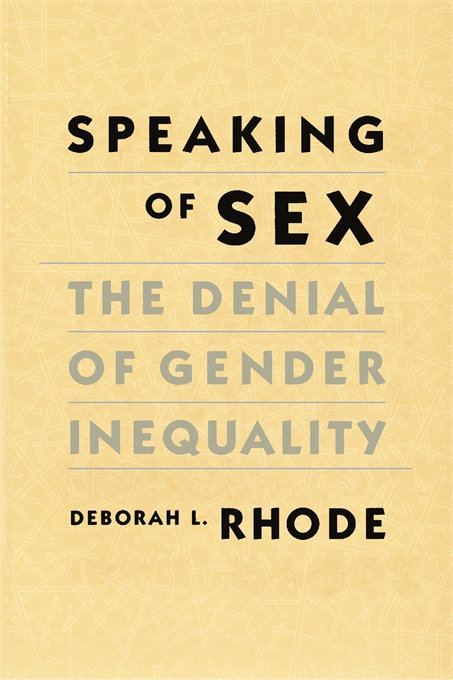 The Denial of Gender Inequality

Speaking of Sex explores a topic that too often drops out of our discussions when we speak about sex: the persistent problem of sex-based inequality and the cultural forces that sustain it. On critical issues affecting women, most Americans deny either that gender inequality is a serious problem or that it is one that they have a personal or political responsibility to address. In tracing this “no problem” problem, Speaking of Sex examines the most fundamental causes of women’s disadvantages and the inadequacy of current public policy to combat them.

Although in the past quarter-century the United States has made major progress in addressing gender discrimination, women still face substantial obstacles in their private, public, and professional lives. On every significant measure of wealth, power, status, and security, women remain less advantaged than men. Deborah Rhode reveals the ways that the culture denies, discounts, or attempts to justify those inequalities. She shows that only by making inequality more visible can we devise an adequate strategy to confront it.

Speaking of Sex examines patterns of gender inequality across a wide array of social, legal, and public policy settings. Challenging conventional biological explanations for gender differences, Rhode explores the media images and childrearing practices that reinforce traditional gender stereotypes. On policies involving employment, divorce, custody, rape, pornography, domestic violence, sexual harassment, and reproductive choice, Speaking of Sex reveals how we continually overlook the gap between legal rights and daily experience. All too often, even Americans who condemn gender inequality in principle cannot see it in practice—in their own lives, homes, and work environments. In tracing these patterns, Rhode uncovers the deeply ingrained assumptions that obscure and perpetuate women’s disadvantages.