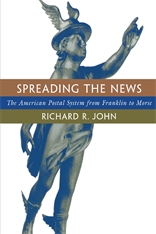 The American Postal System from Franklin to Morse

“Spreading the News exemplifies the kind of sophisticated and nuanced research that U.S. postal history has long needed. Richard R. John breaks from the internalist, antiquarian tradition characteristic of so many post office histories to place the postal system at the centre of American national development.”—Richard B. Kielbowicz, Business History

“Richard R. John provides an insightful cultural history of the often-overlooked American postal system, concentrating on its preeminent status for long-distance communication between its birth in 1775 and the commercialization of the electric telegraph in 1844… John effectively draws upon government documents, newspapers, travelogues, and contemporary social and political histories to argue that the postal system causes and mirrors dramatic changes in American public life during this period… John focuses his study on the communication revolution of the past, yet his meticulous analysis of the complex motives forming the postal institution and its policies relate to such current controversies as those that surround the transmission of information in cyberspace. These contemporary disputes highlight the power of the government in shaping the communication of the people. John privileges the postal institution as the reigning communication system, yet he links it with the developing ideology of the nation, and the scope of his study ensures its value—in the disciplines of communication studies, literature, history, and political science, among others—as a history of the past and present.”—Sarah R. Marino, The Canadian Review of American Studies

“John has produced an original, well-documented, and thoughtful study that offers alternative and enticing interpretations of Jacksonian policies and public institutions.”—Choice

“The strength of the book is…the author’s ability to untangle the thousands of social, political, economic, and cultural threads of the postal fabric and to rearrange them into a clear and compelling social history.”—Roy Alden Atwood, The Journal of American History

“This well-researched and elegantly written book will become a model for historians attempting to link public policy to cultural and political change… [It] will engage not only historians of the early republic, but all scholars interested in the relationship between state and society.”—John Majewski, The Journal of Economic History

“[John] presents a thoroughly researched and well-written book…[which will give] insight into the history of the post office and its impact on American life.”—Library Journal

“John’s book explains how the letters and newspapers sent through the post were really the glue that held the early 13 states together and that embraced additional states as the nation expanded westward… It is a splendid attempt to show the importance of mail service in the years before the telegraph or the telephone made at least brief news transmission possible. The postal system of the 19th century really was a factor, perhaps the major factor, in making the United States one nation.”—Richard B. Graham, Linn’s Stamp News

“This book traces the central role of the postal system in [its] communications revolution and its contribution to American public life. The author shows how the postal system influenced the establishment of a national society out of a loose union of confederated states. Richard John throws light onto a chapter in American history that is often neglected but sets up the origins of some of the most distinctive features of American life today… The book is a comprehensive study on an important American institution during a critical epoch in its history.”—Monika Plum, Prometheus

“[A] splendid new book…that gives the lie to any notion that ‘government’ and ‘administration’ were ‘absent’ in early America.”—Theda Skocpol, Social Science History

“It is surely true that in Richard John the post has had the good fortune to have found its proper historian, one capable of appreciating the complex design and social importance of the means a people use to distribute information. He has also accomplished the impressive feat of gathering together the pieces of a postal history present elsewhere as so many tiny fragments. John has drawn into a coherent design the stories of postal patronage, the decisions about postal privacy, the incidents along post roads used by others as illustrative anecdotes. John’s work has inspired in him a deep appreciation for the accomplishments of the post.”—Ann Fabian, The Yale Review