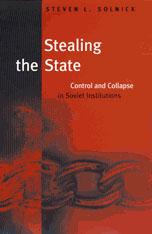 Control and Collapse in Soviet Institutions

What led to the breakdown of the Soviet Union? Steven Solnick argues, contrary to most current literature, that the Soviet system did not fall victim to stalemate at the top or to a revolution from below, but rather to opportunism from within. In three case studies—on the Communist Youth League, the system of job assignments for university graduates, and military conscription—Solnick makes use of rich archival sources and interviews to tell the story from a new perspective, and to employ and test Western theories of the firm in the Soviet environment. He finds that even before Gorbachev, mechanisms for controlling bureaucrats in Soviet organizations were weak, allowing these individuals great latitude in their actions. Once reforms began, they translated this latitude into open insubordination by seizing the very organizational assets they were supposed to be managing. Thus, the Soviet system, Solnick argues, suffered the organizational equivalent of a colossal bank run. When the servants of the state stopped obeying orders from above, the state’s fate was sealed.

By incorporating economic theories of institutions into a political theory of Soviet breakdown and collapse, Stealing the State offers a powerful and dynamic account of the most important international political event of the later twentieth century.