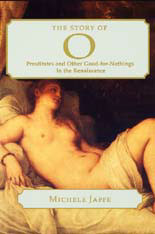 Prostitutes and Other Good-for-Nothings in the Renaissance

This work unfolds the idea of “nothing” out of a Titian painting of Danaë and the shower of gold. Michele Jaffe’s philological and pictorial argument links, across several languages, such seemingly disparate concepts as money, coins, mothers (through the mint’s matrix), subjects, courtiers, prostitutes (through etymologies that join minting, standing-under, standing-for), ciphers, codes, and the codex form.

This ambitious book is a cultural history of the “cipher” zero as code and as nothing, as the absence of value and the place-holder constructing value. It traces the wide-ranging implications of “nothing”—not only in mathematics but also in literature. Along the way, it makes important points about the orthography and editing of early modern texts, and about the material affinities of these texts with painting and minting.