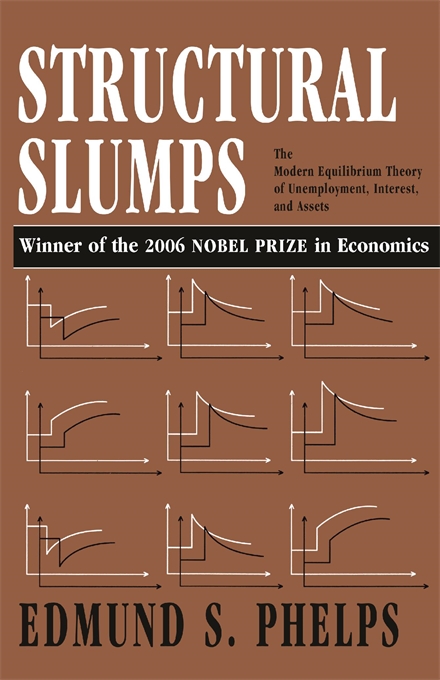 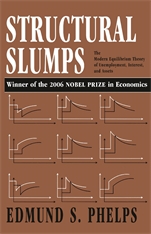 The Modern Equilibrium Theory of Unemployment, Interest, and Assets

“Edmund Phelps’s [book]…is likely to shake the establishment. For while much of what the Columbia University economist (now working at the Russell Sage Foundation) has to say about the ‘natural’ rate of unemployment has been alluded to before, his ambitious explanation of long-term joblessness may serve as a license for intervention in an area where fatalism has long been fashionable.”—Peter Passell, New York Times

“As a result [of this book], academic thinking on unemployment (which will be followed in due course by popular thinking on unemployment) may be about to undergo its third decisive shift this century… Structural Slumps is addressed to professional economists. They will regard it as one of the most important books of this decade. But brave non-specialists, provided they have a grounding in the subject and are not deterred by the necessary mathematics, can learn a great deal. With luck they will include some of Keynes’s practical men ‘who are usually the slaves of some defunct economist’. Few economists write as lucidly as Mr Phelps; among those toiling at the theoretical frontier of the subject, he is peerless in this respect. And he is unusual in another way…he writes with a sense of purpose. Mr Phelps’s theory, he lets you know, matters not for its elegance or technical ingenuity—though it has both—but for the new light it sheds on a problem that urgently demands a solution.”—The Economist

“Edmund Phelps’s book is a substantial contribution to the analysis of swings in unemployment from one cycle to the next… [It offers] a wealth of insights into the nature of unemployment.”—Mervyn King, Financial Times

“[This] project is one of startling ambition, and the book deserves to be widely read and discussed… [Phelps] amply demonstrates how much turns upon a correct understanding of the macroeconomic consequences of market structure. One can only hope that this first bold effort will stimulate others to follow the trail blazed here.”—Michael Woodford, Journal of Economic Literature

“For more than twenty years, Edmund Phelps has been making major contributions, from the workings of the natural rate to the implications of customer markets and of efficiency wages. In this book, he puts it all together. This will no doubt become one of the most important books in macroeconomics of the decade.”—Olivier Blanchard, Massachusetts Institute of Technology

“Profound thinking on a profound problem. Every macroeconomist will want to consider Phelps’s arguments.”—Lawrence Summers, Under Secretary for International Affairs, Department of the Treasury

“This book is nothing less than a complete reformulation of macroeconomic theory, presenting an alternative to both the new neoclassical and the mainstream Keynesian paradigms. Modern themes, heretofore separate developments in theory, are woven together in a sequence of models of compelling clarity and often startling implications: It is not the deviation from the Phelps-Friedman natural rate that is high, but the natural rate itself; contrary to the Keynesian model, welfare-state policies increase unemployment; domestic tax-and-spend policies are contractionary abroad; worldwide deficit spending can be contractionary; high marginal tax rates on labor contribute to unemployment; monetary policy plays little if any sustained role in explaining high real interest rates and high unemployment. These controversial conclusions are supported by empirical tests.”—Pentti Kouri

“An important contribution to economic knowledge—not only offers a new way of understanding long slumps, but also has striking policy implications that are generally overlooked.”—Dennis J. Snower, Birkbeck College, University of London