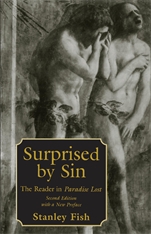 The Reader in Paradise Lost, Second Edition with a New Preface

The achievement of Stanley Fish’s Surprised by Sin was to reconcile the two camps by subsuming their claims in a single overarching thesis: Paradise Lost is a poem about how its readers came to be the way they are—that is, fallen—and the poem’s lesson is proven on a reader’s impulse every time he or she finds a devilish action attractive or a godly action dismaying.

Fish’s argument reshaped the face of Milton studies; thirty years later the issues raised in Surprised by Sin continue to set the agenda and drive debate.