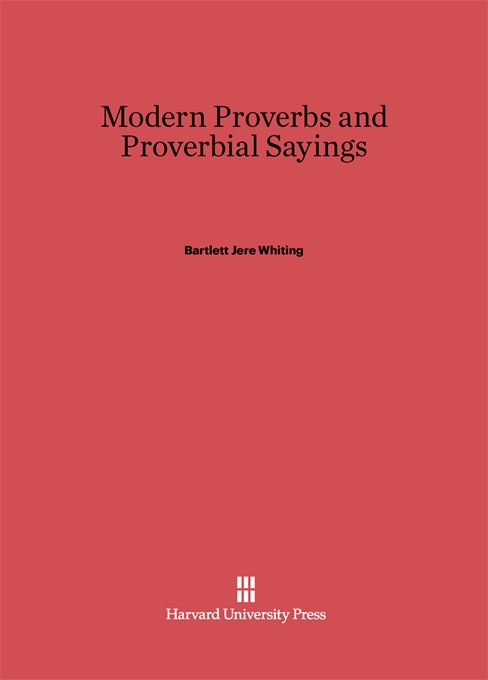 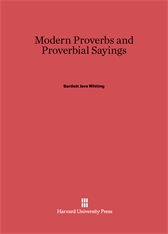 This new collection by our greatest connoisseur of proverbs is the first and only comprehensive compilation of proverbial sayings, British and American, that are actually in current use in this century—old ones still part of common parlance, others recently coined, and familiar ones with new twists. It will be of inestimable value to students of the proverb, of more than passing interest to folklorists and cultural historians, and to the casual browser and language buff a delight.

Bartlett Jere Whiting has, in the course of fifty years’ reading, culled these proverbial expressions from a huge range of sources, some seven thousand books as well as newspapers and magazines. Since proverbs are by nature popular, he has drawn heavily on popular writing such as detective stories and science fiction; with certain notable exceptions (James Joyce among them), major authors, writers of belles-lettres, have proved less fertile terrain than the purveyors of fiction for the masses. No one else has combed a comparable cross-section of the popular literature of this century in search of proverbial matter—and no one now could, given the ephemeral nature of those books. Moreover, only a scholar of Whiting’s expertise could confidently identify the proverbial expressions therein, with all their inversions, variations, and parodies.

The volume is patterned after its predecessor, Whiting’s Early American Proverbs and Proverbial Phrases. The sayings are alphabetized by key words, usually the first important noun or verb, and there are cross-references to other items of similar gist. The body of each entry consists of quotations, with their sources, in chronological order. For those who may wish to trace the prior history of a proverb or phrase, citations are provided to earlier collections and reference works in which it appears.